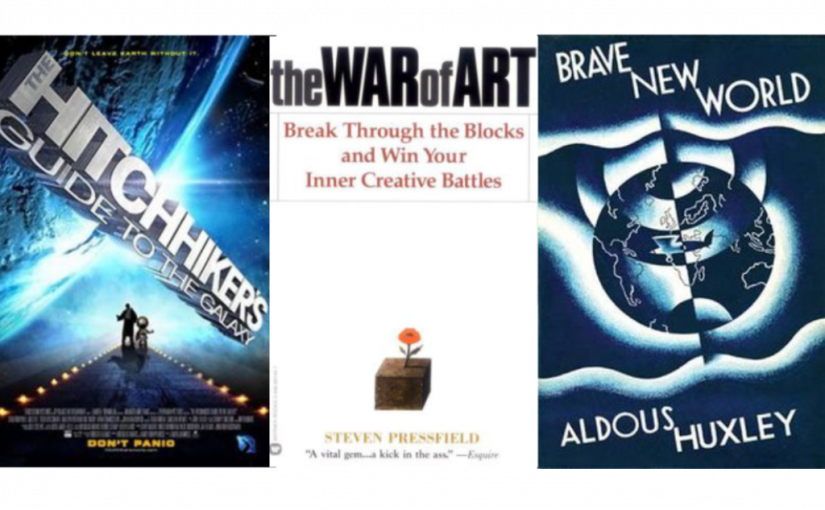 I heard about NaNoWriMo for the first time a couple of weeks back while perusing an online magazine (Quantum Fairy Tales) and saw a post called “Why NaNoWriMo Matters?” What the heck is NaNoWriMo? I read the post and learned first what it stands for–National Novel Writing Month, and next what it is essentially about–discipline. The importance of planning, prioritizing your writing, and writing consistently among other writerly behaviors can all be practiced by participating in NaNoWriMo. I was intrigued . As the November 1st start date was not far in the future or in the distant past (as so often happens with randomly found blog posts), as to make waning excitement or forgetfulness stop me, I decided to do it. After all, the only requirement is that I write 50,000 words in the month of November which breaks down to about 1667 words a day. As a writer, I should be able to muster that (in the month of November and beyond), right? And besides that, I’ve got a novel idea just waiting to be birthed!

So tomorrow begins the challenge of writing a novel in a month—a short novel to be sure, but nonetheless a novel of at least 50,000 words–which, as the NaNoWriMo Wikipedia page tells me, is the approximate word count of such notable novels as Hitchhiker’s Guide to the Galaxy, Brave New World and The Great Gatsby. I believe also that it is the approximate word count of one of my all-time faves, Heart of Darkness but I have to check on that, hold please…

Oops, I was off! It looks like Heart of Darkness is really a novella of 30,000 words. Damn. Novellas are not given the respect they deserve. In fact I read on the NaNoWriMo website that 50,000 words is closer to novella length–most submissions for novellas suggest that 40,000 is the upper limit, but that novellas are less impressive and in the end, the point is that a significant swath of writing, novel, novella or something non-fiction or, gasp! Poetical, can be written in a month. Fifty thousand words sounds like a lot if you have a full time job or kids or what have you. However, when you break it down to one thousand six hundred and sixty seven words a day, it seems more manageable. And that is really the point. It is doable.

Or not. Geez. It’s 10:14 AM on the scariest day of the year and I’m all dried up, finished. I got nothing. Shall I quit? Shall I give up this ridiculous task of writing 1667 words a day? I could legitimately procrastinate! For instance, I’ll start tomorrow. Tomorrow I can start writing my novel and that will be easier. I’ll not run out of things to say with that. Ah ha! I’ll tell you about my novel to come and thereby generate some more words. I’ll not give up!

My science fiction spy novel is the novel to be. I’ve been putting it off ostensibly because of the research involved. I would need to study spy craft, not just read le Carré novels as I’m wont to do, and I need to study some hard science, which is no joke for a humanities gal. I also must research the near-future probable and possible in technology. There is also one other line of intelligence I have to learn about but it’s a secret since it relates to the twist in the novel, so SHHH!

Full disclosure: I have tried writing a novel before, but who hasn’t? It turned out that my novel was really just the retelling of a myth, which is not so marketable, and though nobody likes to write for the market, it is hard to get excited about something, which, in the writing world at least, seems rather overplayed and done. That said, several stories have birthed from Metamorphoses of Tiresias, including “The Lost Myth of Tiresias’s Womanhood.” More importantly, it started me on the path to being a (fairly) diligent writer and submitter of stories, but I’ve not tried my hand at a novel again. In fact, I’ve been rather a chicken.

Being a person who tends towards self-examination almost to a fault, I think (in order to fulfill today’s word count requirement, which, you may have surmised, looms large) I will (as such things seem to be all the blogging rage) make a list. My list pertains to the Obstacles I’ve found in my way of committing to writing my new (and sure to be best-seller) novel:

2          I read a lot of novels (see above), and so deciding what to write and how and in what way and with what gusto feels crushingly limitless.

3          This should probably be number one insofar as it is fierce, but on a daily basis, it is not always obvious: fear. Fear of failure in one’s own eyes or the eyes of others, fear that it will not be nearly so good as it had seemed in utero, fear that it will not get done and will remain a spirit trapped between worlds, left to wander and haunt the liminal space between idea and finished object. FEAR FEAR FEAR

4          Resistance. I pilfer this term from Steven Pressfield who is perhaps most famous for writing The Legend of Bagger Vance, but is known to me by his ancient-times novels such as Last of the Amazons. He wrote an entire book on resistance called The War of Art, a tactical guide to combatting resistance, from which I could steal my entire list, but for which I will give him credit here. In particular, I take from him the idea of daily resistance, I might even say mundane or quotidian resistance. It’s the little things like starting to write in the morning, just like you are supposed to and then getting a phone call from a collections agency about your student loans in default, or starting to write, needing a drink of water, going into the kitchen, being aghast at the dishes piled in the sink and doing them all the while cursing all those inhabitants of the household who did not do their dishes. Starting to write and remembering that you forget to respond to an email, text, call, Facebook tag, IM, etc., etc., etc., and open the can of worms in question and drowning in the slimy critters that are modern communications. It’s also opening up your computer with the best of intentions and editing instead of generating new, or sending stuff out instead of writing, or looking at likely places to submit and all the other things that feel like you are promoting the well-being of your writing while neglecting the writing itself. This last is the most insidious because it may not even appear as resistance and, if you are a good editor, can take weeks away from your writing without even promoting guilt.

As I near my goal for the day, I realize that this word count thing is very good for one important reason: after a couple hours of work, you have something to go on. I now have this silly article about writing and not-writing that I will post on my blog for no one to read (after much diligent editing of course) that I would not have had if not for what I will call the NaNoWriMo effect. And, it is 11:17 AM so now I have all kinds of time to do other (paid) work, plus reading novels, plus more “pitching and moaning.” But having met my day’s goal, I can go about all these things with a lighter heart.

Shit. I feel like I just wrote my conclusion and I still have 310 words to go. Now what do I do?

Oh, I just realized I left out what is probably the worst and most crushing obstacle to writing a novel:

5          The worry that you are, in fact, not a writer. If you are writing every day–not editing, not submitting, not doing dishes and thinking about writing, then in a beautifully literal and unarguable sense, you are a writer. Though it may not satisfy your mom or dad or partner or best friend, though it may not even satisfy the dreadful cocktail question or what you are up to these days or even your own inadequacies of existential import, writing every day with the intent of manufacturing a certain amount of words that, as they grow in quantity are inversely less likely to have been written before or the likelihood of being written again, by you or anyone else, you make yourself a writer. And, as this optimistic rant must continue till 1667, I conclude thusly.

Writing in the literal putting words down on paper, of the chemically treated wood pulp or virtual varietals, is the ONLY thing that is in your control. You cannot bribe or threaten the editors at The New Yorker or Asimov’s or the Paris Review or AltHist, and you cannot, no matter how much you try, get anyone you love to read as much as you do or to care as much as you do about literature or writing (specifically your writing), and though you cannot will yourself into the hearts and minds of millions or onto lists of best-sellers or even to win a coveted prize or contest, YOU CAN WRITE.