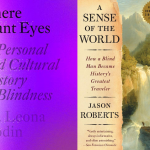 My blind sewing adventure began about seven years ago when on a whim I searched for, and found, sewing needles at MaxiAids, a website that sells disabled people gadgets. As with so many of the great things that have happened in recent years to enhance my life as my sight fails, the technology inspired the activity and the activity inspired creation.

I bought two kinds of needles. The first I use all the time for general sewing they come in a rainbow pack of sizes, but each needle, from fat to skinny, share the ingenious feature of a slit at the top wherein you push the thread and it gets trapped by a little hook. The other needle is perhaps more clever but less sturdy and more prick-prone. It is called “Big-Eye” and this is not false advertising. The eye of the needle splits the slender flexible steel from one sharp end to the other. This is the needle to use for beading and the like because it is so skinny, but of course it tends to get bent out of shape with little provocation. With these two needles and my dress form, I have made all my best loved dresses.

Now, I’m not going to lie to you and say that nothing I’ve made has turned out a sequined monstrosity, or deny the sad existence of more than one vintage-lace carcass, seem ripped beyond all repurposefulness. But there are a solid handful that have been successful enough to garner many compliments and become staples of my performing life.

One of my first major successes was the little black furry dress AKA the sexy teddy bear dress. If you want to be petted, this is what to wear to your next cocktail party! Because of course, in the end, it’s all about texture.

I whittled away countless hours of listening to epic novels while creating this one, which consists of individually knitted patches of black eyelash yarn sewn onto a dance dress. You can see it in action in the behind the scenes portions of the Proto Trailer for The Star of Happiness, my one-woman show about Helen Keller’s time on Vaudeville.

Worn by Marie Antoinette in The Spectator and the Blind Man, my play about the very sexy history of the invention of braille, and removed by her over the course of her heart-breaking monologue, the Burgundy Ensemble has had a lot of performance wear. Come to think of it, it is not only my clothes that get repurposed. I refashioned Marie Antoinette’s monologue into a flash fiction piece called Nothing Can hurt Me Now, which has, I’m delighted to say also been published at Quail Bell!

The burgundy corset dress also features in the short film The Kerfuffle in which I play Sam, a blind floozy who gets busted for two-timing a couple of amputees… Oh just watch it; it’s cute! Even my mother thinks so.

The materials at hand, whether tawdry or elegant, shiny or shabby, provide inspiration for my sewing creations. In this case, several gorgeous yards of butterfly and flower embossed satin, given to me by my best friend when I visited her in Memphis, presented the impetus. The ensemble consists of A corset top and skirt with enormous pockets. I put pockets in all my designs because girls should not have to be encumbered by purses!

For the underskirts and halter ties, I used some opaque burgundy curtains I’d purchase years before. (It is likely that Scarlett’s green “Curtain Dress” in gone With the Wind is a significant design influence!) Finally, in an adventurous mood, I bought a handful of rhinestone flower ribbon decorations on EBay which cost $2.50 and took three weeks to ship from China, but which worked perfectly as accents on the bodice and the skirt.

The top’s foundation, an old and unattractive corset, came into my possession during an unfortunate performance on a boat in which I did not win a certain “Miss Demeanor Pageant” despite my first round sweep and my lovely assistant Millennium, my black lab guide dog! Anyway, somewhere in the madness of the dressing room I ended up with someone else’s corset that became the shell for my corset top. I draped and sewed the burgundy satin over that top and over a little side zipped skirt that I used as the skirt base. You see,   I am a very lazy sewer. I like to do the fun pretty draping designing stuff and the mindless stitching, but refuse to waste my time putting in zippers!

In fact, I think that even if I’d not lost my sight, I would not have kept up with the conventional sewing I learned in grade school. I could see quite well back then and, although I made a few cool things, the precision and patience of patterns and darts and button-holing was just not for me. So, oddly enough, I think that my blind sewing is something I’ve come to as a culmination of who I am as an artist and a blind person, not as an approximate adaptation of the former behavior of my sighted self. The spirit of blindness infuses everything I do and makes it, if not always better, at least more interesting.

This one is comprised of no fewer than seven clothing items from decades of life and death. It began with fashioning the lacey waist-cincher pocket accoutrement out of several items bestowed to me by my mother’s friend who died and left me all her clothes from her seventy odd years of collecting/hoarding. I fastened that odd device, which on its own looked a lot like a holster, to a knee length circle skirt to which was added the real bells and whistles of the ensemble: a gold-threaded crocheted wrap that, although very glamorous, had always been too scratchy to use. I wear the skirt with a lacey crocheted top kept from my long ago wild days in New Orleans whose sleeves were cut for the heat. But, hot as NYC summers may be, one must have some portable sleeves to beat the arctic AC. Et voilà, enter the slightly bell-sleeved black crocheted half sweater with iridescent threads that ties under the boobs.

The whole ensemble looks good enough that I adopted it as my audition outfit. Good enough to prompt an ABC Casting director to say when I walked in the terrifying audition room, “What a beautiful dress!” Good enough to momentarily disconcert her, and boost my confidence, when I said, “Oh thank you. It’s my latest creation.” Herein lays the joy of wearing clothes made by you when you are a blind person: it confuses sighted people, which is often just what’s needed to refashion perceptions!