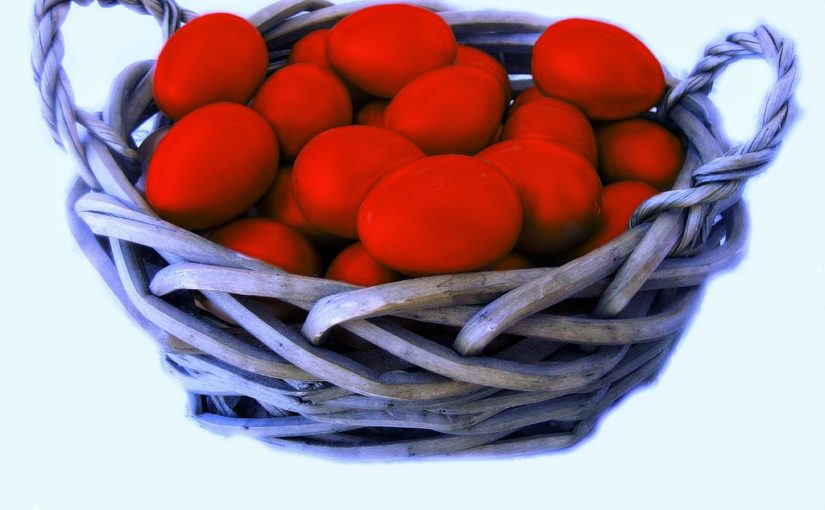 We arrived late as always, so that there was no place to sit, though there’s not a whole lot of sitting in Greek Orthodox churches. Standing in our coats, clutching our unlit candles, we crowded in with the others who, like us, came to church but once or twice a year. I was between my mom and my Thea Yvonne and on the other side of her was my Uncle Art–there’s a strange convention in our family to call our Aunts by the Greek thea but our uncles by the American uncle. I don’t know why, but it pretty much sums up the willy-nilly Greek/American distribution of traditions on my mother’s side of the family. And if there ever was a perfect blend of these two strains of holidaymaking, it was for me Easter, when I got the best of both worlds.

I waited impatiently for the music that heralded the candle lighting, and when it happened, the church erupted in song. “Christos Anesti!” (“Christ has risen!”) was sung over and over again. Wikipedia tells me that this is called the Paschal troparion, originally written in Koine (common) Greek, the original language of the New Testament, but translated into countless languages and sung in Eastern Orthodox Churches all over the world, as witnessed by this YouTube video.

The gold ceiling caught fire as the candlelight passed from the priest to the ancient and impossibly shriveled old ladies who sat at the front of the church swaddled in black, like ornery newborns. I could not see them, but knew they were there because they were always there, coming early for the good seats and staying late against their doom.

The stone church glowed like an oven when the first candle of my relatives was lit. My mother nudged me to hold my candle with its protective cup to catch dripping wax, straight. This I did with great anticipation, mouthing the words of Greek I wished fervently I knew, a desire, which would be forgotten by morning when American Easter baskets of chocolate bunnies and sugar flowers would drown out the yearning for the culture in which I feebly swam. But for now, it was the dark ritual that sparked passion in my young heart, and it was coming to its wonderful climax.

Being in the back meant that although we were among the last to arrive and receive the flame, we were the first to leave. Once all candles were lit, and a final round of Christos Anesti sung inside the church, the doors were flung open and we took our fire and our song and our ancient ritual with its pagan roots outside.

We circled the Ascension Cathedral thrice and, so embedded is the celebration of light in the human imagination, that even my profoundly secular heart (which loves all dark and mysterious things without attributing the magic of life to any great being) find this ritual memory moving to the point of tears. Who can deny the beauty inspired by belief? There is horror inspired by belief also, but this essay is a celebration of the beautiful.

Atop the Oakland hill, the streetlights twinkled below. Our flames’ progress was not the only light in the darkness, as our forefathers may easily have imagined on some Hellenic hill in centuries past, but still, as my eyes were just beginning to show signs of the degenerative disease that would eventually mar distinctions between day and night, I easily imagined ours to be the only light in that dark bosom of midnight. What ten year old could fail to appreciate the delicious transgression of wakefulness? Or to relish the solemn joy that was the reenactment of the ultimate Christian paradox: in order to live, one must die.

Perhaps some of the congregation reentered the church to finish out the service, and there is some part of me now that yearns to return with them into that quiet place, filled with the recent echoes and rustles of some hundred souls. But that was not then my yearning. In the back seat of my uncle’s Cadillac, I stared at my candle and chattered about how beautiful it all was while already my mind was turning to dinner with its own set of light-hearted rituals.

The table spread out like an Easter parade with silver candelabras waiting to embrace our still-lit candles set next to baskets with glittery grass and shining colored eggs. We did not then do the red eggs as is traditional in Eastern Orthodoxy, though, in recent years, my mother has placed the incongruous blood-red eggs (with all their gruesome metaphorics) into American Easter baskets. But when I was little, she wanted me to enjoy the sweetness of the American dyes as if to preserve my innocence, although, even then, the veil had begun to fray.

A mysterious dystrophy was happening in my retinas and I’d already been to one or two ophthalmologists that year. It was precisely those doctors who, confronting their own ignorance and inability to explain why their lenses could not correct my vision, opened a great and never-to-be-closed chasm in my child’s psyche: I was made suddenly and irrevocably aware of the limits of human understanding. It was in 1981 that I learned how the smell of ignorance permeates all–never mind the bright white robes of clean and apparent knowledge.

It is also in my memory that at that year’s Easter dinner I had my first taste of watered wine and felt very grown up. I was the youngest and only girl at the table. The only other kids there were two of Thea Yvonne’s three sons, who were quite a bit older than I. Thea Yvonne had yearned for a girl child that she might pamper with all the sweet things her own childhood in the Greek mountain town before and during World War II had not offered her and her sisters, and I was happy to step in. Her beautiful house offered me eyefuls of objects to gawk at and love, as well as a storehouse of visual memories to treasure, now that I can no longer see:

A collection of Madame Alexander dolls dressed in costumes from around the world, and Art Deco prints with elongated women in peacock dresses whose skirts are attached to gloved hands. Pristine and plush white rugs led out to a dark pool–one made of stone that puts aqua fakery to shame. And, beyond the pool, Thea Yvonne’s rose garden taught me to love outrageous blooms with august names like Queen Elizabeth and Sterling Silver that resembled not at all the upright uniformity found in shops. One blossom presents itself to my mind’s eye in a cinematic close-up: a pale rose with a dark center, its ivory petals rimmed with wine.

I am suddenly tempted to Google “Easter egg fight,” to know if it is American or Greek, though I suspect the latter for two reasons: First, Greeks tend to be a competitive lot, and second, because the tabletop tournament requires some Greek be spoken. But I will not. I prefer to remain blissfully ignorant and pretend my family invented the game.

I believe my mother conducted the Easter egg fight that year, but that could be because she was my first combatant, sitting next to me as she was. “Pick your eggs!” Everyone reached into the baskets and chose, very carefully, the egg they believed would beat the rest. I chose a purple one. It felt strong and solid as a stone.

“Ok, pointy end to pointy end,” said my mother. “You want to hit first?” “Uh-huh,” I said and poised my egg above hers.

“Christos anesti,” I said and my mother responded, “Alithos anesti.”

“Oh!” we both cried. I was victorious.

“Turn your egg around.” This time she hit me, but again I prevailed.

I took my winner egg to my cousin, whom I may have had a little crush on, as I did most boys since I didn’t have many of the male persuasion in my life after my parents divorced and I started at an all-girl school. But I beat him too, on this my favorite and most special Easter ever. And on it went “Christos anesti–Christ has risen!” Alithos anesti–Indeed he has!” BONK Smash CRACK I went around the table to the eggs that remained uncrushed and crushed them all!

I was so proud. My champion was placed back into the basket with great solemnity.

Then I selected another egg to be sacrificed to my dinner–sliced and generously sprinkled with salt and pepper and eaten on top of buttered pita bread–what we called the sweet Easter bread that required much love and warming blankets to encourage its multiple risings. I was not much of a meat eater back then, so I can’t tell you about the leg of lamb, but my current, wiser self knows it was delicious and regrets her youthful folly!

Eventually my eyes grew droopy. There was no more postponing the inevitable. I was tucked into bed. First to sleep, first to rise, I woke up to a new house–one transformed into an Easter Bunny’s playground, and enjoyed an Easter egg hunt made for one, traipsing around the house finding little nests of candies with clues to the next treasure written on cards decorated with baby chicks.

Because my eye disease stole my central vision first, it would not be long before I could not read such cards, but on Greek Easter 1981, the year I was ten and balancing on the cusp between seeing the world through a bright child’s lens and darkly through that of an adult, I was filled with excitement at finding what had been created just for me. I ran upstairs to show my mother each piece of candy and trinket I found, as if she had never seen it before, as if we’d never either of us seen anything like it before. Or would ever again.