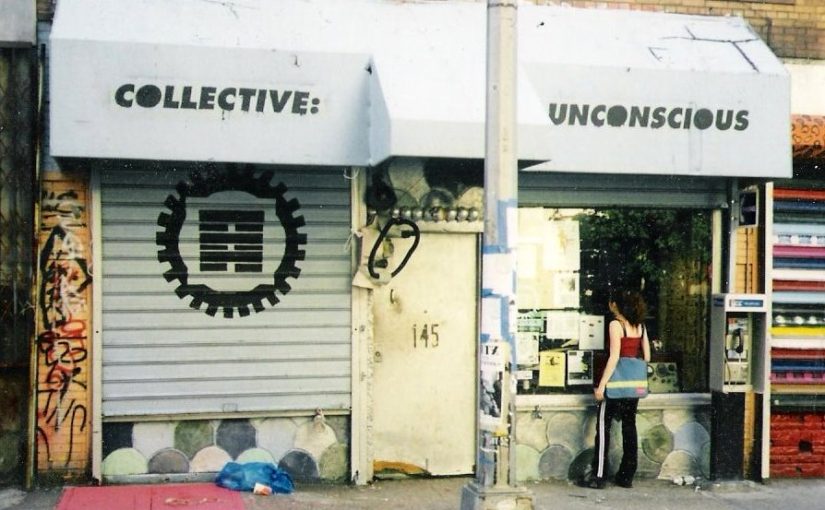 One cannot help but be aware of Jung; his collective unconscious is ubiquitous, and , for me, symbolizes the literal birthplace of my artist at Collective:Unconscious. My metamorphosis from an academic to an artist began at Rev Jen’s Anti-Slam, which took place every Wednesday night at Collective:Unconscious, a black box theater on Ludlow, before the Lower East Side squeezed out the artist with trendy bars and high-rise apartments.

Without any exaggeration, I can say that that place changed my life–whether for the better or worse is, I think, undecided. And yet, if I take a Jungian point of view, better or worse is not the point. The point is individuation. In that case, walking into Collective:Unconscious, signing up, and getting up on stage with Millennium my first guide dog, and performing a little monologue which I thought was a comedy routine at which nobody laughed, though the reception after was heart-warming and encouraging, represents one giant step on the path of becoming me.

My new friend Florian Birkmayer, a psychiatrist who finds an alternative to the biomedical model in Jung’s conception of individuation, explained this to me in an email:

” The Jungian view says that each of our lives is a unique opportunity to individuate, that is to become fully ourselves–our symptoms and struggles can be transformed into meaningful experiences on the journey of discovering our Personal Myth. Individuation offers a lifelong path of evolution, embodied in each of our Personal Myths.”

In my reply, I mentioned that I was inspired by his words to finally pick up Jung and was starting with Man and His Symbols, which he wrote in the last years of his life with the lay reader in mind. Florian also recommended what he called Jung’s “mythobiography” Memories, Dreams, Reflections.

The term mythobiography immediately resonated as a reversed version of an online class I’d recently signed up for with Sofia Quintero called Jumpstart Your Biomythography, and so I downloaded the book and in the prologue found this resonating quote:

“Thus it is that I have now undertaken, in my eighty-third year, to tell my
personal myth. I can only make direct statements, only ‘tell stories.’ Whether or not the stories are ‘true’ is not the problem. The only question is whether what I tell is my fable, my truth.”

Mythobiography/biomythography gives a name for what I’ve done in so many of my blind literary projects: Helen Keller on Vaudeville was the first time I incorporated myself into the blind myth as an artistic endeavor. But the process really started earlier with work in graduate school: a paper called “In her Crooked Way,” about the visually impaired barbarian girl at the center of Coetzee‘s Waiting for the Barbarians, who has an eye disease that presented awfully similar to my own at the time of writing. And In my master’s thesis Écriture Nocturne and in my dissertation The Spectator & the Blind Man: Seeing & Not-Seeing in the Wake of Empiricism, which was turned into the stage production of The Spectator & the Blind Man: Stories of Seeing and Not-Seeing,” and now flash-fictions, which are ready, I think finally to be incorporated into my very own mythobiography. Although every blind character, fictional and “true,” has been to some extent me, that is no more or less true of all the sighted characters.

Because I’m as much a sighted person as a blind one–having lived my life on pretty much every notch of the sight/blindness continuum–they are all me–from Helen Keller to Louis Braille, from Marie Antoinette to Denis Diderot, they are all seeing and not-seeing, as are all of us.