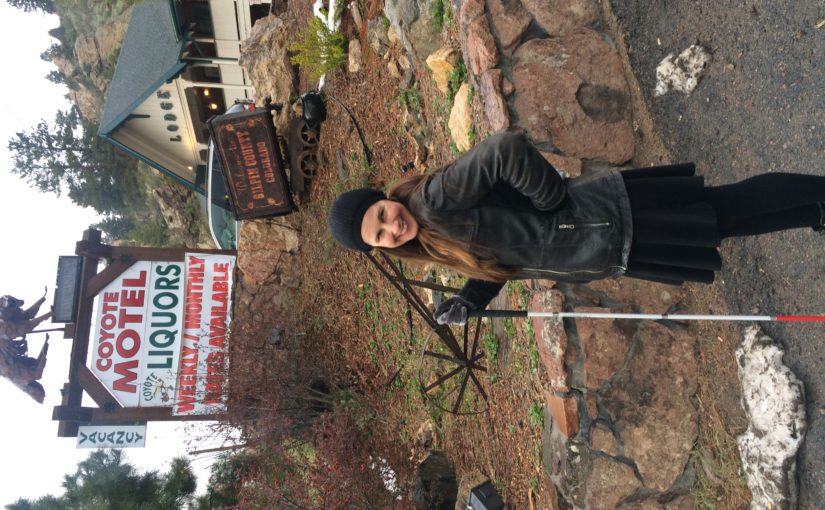 We left our friends and drove according to my awesome navigation (with a little help from my iPhone) through Rocky Mountain majesty, seeking a place to stay. Using the fully accessible Google Maps I found and wanted a cabin on Bear Creek, but we were too late for that–disappointing not only because Bear Creek provided a marvelous soundtrack of white water rushing and barbeques for grilling and was idyllically located amongst sheer cliffs, but also because it was just a mile or two down the road from Cactus Jack’s, a biker bar whose tagline is “burgers re-built for dreamers,” that called to Alabaster and I with its absurd and romantic reference to a desert landscape.

By then dusk was falling and we really wanted to avoid Motel 6, and finally looking down the list I found Coyote Motel, and was enchanted. We’d decided that we would, from now on, call before driving the few but long mountain miles, and I did and she said she had rooms and sounded sweet. I was sold and we started following the complicated directions that miraculously took us from one county road to another and through darkening valleys and even a mountain tunnel to Blackhawk–a casino town.

I love that Alabaster lets me be the navigator. I call out the instructions and he listens and it makes road trips fun and interactive for me again–God Bless the iPhone! I haven’t had so much responsibility on a road trip since the old days of travelling with my best friend Indigo and playing navigator with a giant atlas and a magnifying lens.

Following my directions for Colorado county road this to junction that, we made our way to CO-119, and there, in the middle of nowhere, with signs advertising Liquor Store and Pawn Shop, was the Coyote Motel, and Alabaster was delighted. “This is something!” he exclaimed. “I’m not a writer, and I’ve got all kinds of stories–can you imagine the misery that’s happened in this room? Ok, fine, he waxed poetic about the gambling melodrama once we got our nips into our room, but he was pretty excited about this place from minute 1, though he admitted later he was concerned about the room, until we stepped in and found it very pleasant, with a bedframe of tree limbs, and a fridge and a microwave and tidy as one could want. But I had seen its rating on Google Maps that ranked it far and away above any motel 6, so I wasn’t worried. Anyway, I’m getting ahead of myself here.

We walked toward the Coyote Motel office and I worried that it had taken us too long and that the 3 rooms that had been vacant when I called were now occupied but, as usual, my pessimism was in vain. No, the lady with the sweet demeanor on the phone smiled at our request and directed us from the liquor store counter around the corner to the motel rental counter–not around the corner into another door but around the counter to the other register.

Later, when we returned to buy our liquor and snacks Alabaster teased that she needed a different hat for each counter, and she said she’d get confused which one to put on. On that second trip to the one-stop-shop, Alabaster, knowing my interest in essential oils and the like, noticed aloud a sign that read “Rocky Mountain Organics,” and I was duly confused and excited. “I think I know that company!”

So we walked around and all the way down to the other end of the shop where a lonely guy stood waiting for someone to pawn their wedding ring or ski boots, and we asked what the Rocky Mountain Organics was, and he sort of shrugged as if to say, “I dunno.”

Then we went and picked out our vodka and frozen chimichangas and, thanks to me, a bag of Rockies Baseball peanuts still in shell just like you get at the ball park and returned to our room and Alabaster read some highlights from the little newspaper that we found on the night table. Colorado Gambler is an upbeat rag dedicated to local gaming, recreation, and entertainment. We laughed and drank and had a grand old time playing hooky from the folks for the night.

In other words, in addition to selling our electronics and buying our booze and our junk food and our night’s stay, we could have bought an eighth of organically grown sativa. But, you say, you don’t even smoke weed, and that’s true, but I have friends that do, and sometimes you have to live the story. Besides I would have liked to have seen our Coyote Motel gal put on her marijuana hat!