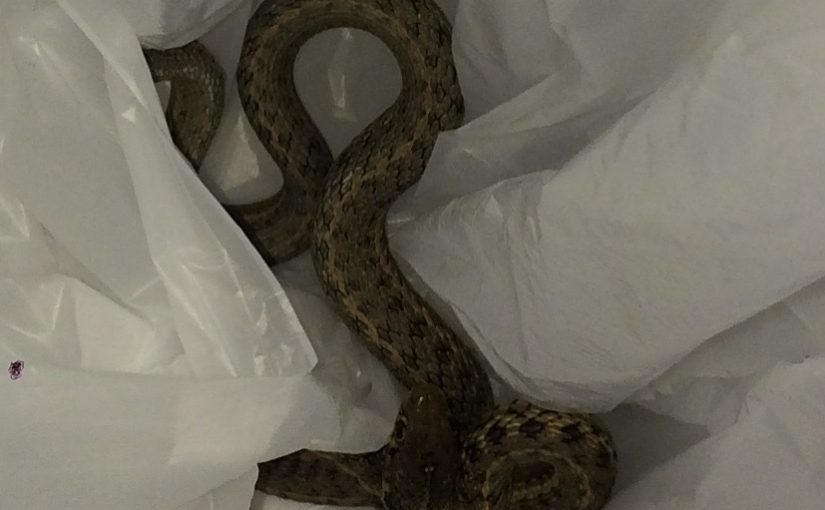 Last night while I was sitting on our bed talking to Alabaster about today’s plans to check out an open mic in Castle Rock, Alabaster stopped me and said, “Hold on a sec.” He had been standing in the doorway and stepped into the hall, grabbing something on the way out. I learned this thing was the little trashcan next to the door of the bedroom that usually holds Kleenex and clumps of hair pulled from my brush. “I caught a snake,” he said, and I was like, “you caught a snake?” I thought he was joking. “Yeah I caught a snake. It’s under the trashcan.”

I’m not generally afraid of snakes–I’ve held many snakes in my life, mostly when I worked at the San Francisco Zoo when I was a kid, as I wrote about in The Voice of the Turtle. There was something intensely satisfying about having people see me from forty paces and back away, “Oh no, I don’t do snakes,” while their kids skipped up to touch it. Usually these snakes were relatively small in diameter, an inch or two around but several feet long, so they could wind compactly around my hand, a feeling that to this day is one of my happiest haptic memories. The feel of snake muscles contracting and releasing, curling through your fingers, absorbing your warm-bloodedness, is really wonderful.

Every so often, I was given the boa to take out on the Nature Trail, and that snake with its circumference nearly the size of my neck, draped around my neck, provoked screams. It was fun.

However, there’s a world of difference between the snake you pull out of a terrarium and the snake you find in your house, or at least the house of the boyfriend’s parents, where you are staying for a few weeks. It’s a very nice and rather large and sprawling house as discussed in Winter Wonder Maze, and we occupy part of the downstairs–don’t call it the basement unless you want to ruffle the feathers of Alabaster’s mom.

Throughout the days of his sister’s recent wedding–a wedding, which happily diverted Alabaster’s parents’ concerns for our unweddedness–the bridegroom teased the mom about the basement. “It’s not a basement. It’s the downstairs!” she would insist and we all laughed.

In reality, we are halfway underground; there is a well that runs around our floor allowing in light by way of the well that has its bottom pretty much level with the bottom of our windows. Apparently, it has often happened that small animals–mice, rabbits, salamanders–get blown off the street level into the well and get stuck. That is probably what happened to our snake. The only way out was in, through a screen that was not on tight.

Alabaster got a picture of it and then took it upstairs to show his parents. They were not as freaked out as I imagined they would be and his dad drove him up to the top of the little hill where the mailboxes are, where we had just walked yesterday to catch the trail up the mountain, to release the snake. He shot out of sight as soon as he hit the good earth. Alabaster told me when he returned with our empty trashcan, “he was very happy to be free.”

Although a quick Google search revealed that our snake was just a harmless plains Garter, last night we went to the bathroom with a little more trepidation than usual. Even so, we both slept very well. No snake dreams. We do not take it as a sign, but I am glad to have a sighted boyfriend to spy out such things. We are living in sin, after all, so who knows what critters may drop in from time to time!

*This is Essay 19 of #52essays2017, written with all four senses and remembered sight. Read #18, about Jung and my early days performing at Collective: Unconscious here*