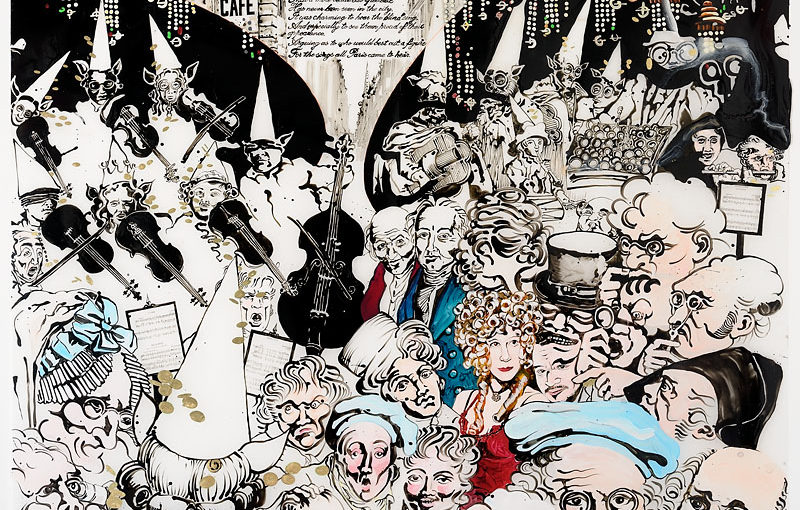 When I started my grad degree at NYU, I was given, for my nearly exclusive use, a little padded cell in the basement of Bobst Library where, in the beginning, I read books on the history of the education of the blind alongside postmodern theorists. It was black, or I remember it as such because of the black acoustic foam on the walls. The room was insulated in order to keep the electronic voices from seeping out into the quiet library. It was the A Level below the main floor and it, along with the B Level was open twenty-four hours a day, excepting holidays. This meant that studious NYUers could enter any time of the day or night.

These were the days before the several students launched themselves off the balcony, perhaps hypnotized by the interlocking pattern of colored marble on the main floor. I know that on the occasions I was up there looking down, I felt drawn, and could easily imagine the invitation, the siren song of putting an end to the interminable expectations of youth. While I was still at NYU, the gates went up on the stairways and around the balconies to keep this from happening.

As I walked across that shiny expanse that reminded me of a ballroom, I usually looked up not down. Although I thought how wonderful it would be to study up there in the light-filled spaces of the upper floors, my reading equipment was below ground. And so usually, I walked across the expanse to the bank of elevators that opened near my little room with its keypad code entrance just for the visually impaired and blind students of NYU.

If I looked left on my walk to the elevators, I saw the circulation desk and, in the first couple years I was there anyway, the card catalogue to the right. Later those very particular looking chests of pullout drawers with their little cards that held thousands of books–inaccessible to me since I was a very young teenager were replaced with a museum-style exhibition area with pointed lighting. No one would be using those cards anymore; every book would be catalogued online and accessible forever more, thank god.

The times I rode the elevator up instead of down, it was with my reader. We would hit the card catalogue and then troop around collecting my books. He would read some of those books to me–an intimate experience that deserves its own essay–but many of the books, especially those I planned to read from cover to cover and that boasted clear print, would get taken down to my little black padded cell to be scanned by an enormous stand-alone electronic reader called a Kurzweil. Today my Kurzweil software is in my laptop and I often use it to download books or occasionally to scan them on a portable scanner that is about the same size as my laptop, and it does a great job–big improvements in OCR over the past twenty years!

I kept a little pile of books in a plastic bag under the desk in my padded cell, and once, after a night out with friends–those were the days before guide dogs and white canes when I still looked normal and could mostly travel freely–I entered and scanned a book on the history of the education of the blind. I read drunkenly and while eating my bodega bagel, about Valentin Haüy’s dramatic discovery of ten blind performers, an account that always stands at the origin of the education of the blind.

Stumbling into a not-very classy entertainment venue in eighteenth-century Paris inspired Haüy to begin his path that would eventually lead him to found the first school for the blind. The scene of the blind men, gussied up and banging their broken instruments delighted the crowd. It may have been the Age of Enlightenment for the philosophes, but the rabble wanted their lowbrow fun! Here’s a representative version found in Journey into Light: The Story of the Education of the Blind (1951:

“Valentin Haüy was strolling through the streets of Paris one autumn day in 1771, some years before his meeting with Maria von Paradis, when a crowd hooting and laughing in front of St. Ovide’s Cafe on the Place Louis-le-Grand-today the Place Vendome-drew his attention. This grave young scholar crossed the cobbles to see what amused the shrill-voiced women in ruffled panniers, the rowdy men in tricorn hats, coarse yellow cloth coats, black breeches and copper-buckled shoes.

“He stared incredulously at the mummery being enacted on a platform raised above the cafe tables. Ten blind men scraped their bows in pantomime, drawing shattering discord from violins, cellos, basses and viols. They stared blankly at sheet music turned on the racks so that the notes were visible to the jeering audience. Their sightless eyes were ringed with huge pasteboard spectacles devoid of glass. They wore grotesque robes, with dunces’ caps and asses’ ears. A Midas headdress distinguished their leader. A peacock tail unfurled was the backdrop for his operations.

“Lighted candles cast shadows on their weary faces and gave raw emphasis to their infirmity. … Every day for two months they had scraped, fiddled and kept up a monotonous accompanying chant, while their audience jeered, banged tankards on the tables and screeched bawdy jokes. Now and again a drunken couple rose and danced in the street to the fantastic music. The rowdies who gathered at night stormed the blind men’s platform and would have demolished it in their exuberance but for a cordon of guards called in to keep order.

“Already the place was being renamed the Cafe des Aveugles [Café of the Blind]. Prints advertising the curious show were sold by M. Mondhar on the Rue St. Jacques, with a sketch of the scene, an announcement, and some misspelled doggerel verse.”

This extraordinary scene is woven into the origin story of the education of the blind, and it continues to haunt me because, after twenty years, I still doubt I’ll ever be able to shrug the moment off as being alarming, inexhaustible fodder for art. Here’s the first piece I ever wrote for The Spectator & the Blind Man, first published as flash fiction at Danse Macabre.

When the first fat coin smacked my face, I had to admit Monsieur might have been right about his strange money making venture. Of course that wasn’t my first thought. My first thought was, “Ow, what the hell?” And my second thought was, “Shit! Where’d it go?” I wanted to look for it, but I thought that if Monsieur saw me groping around in the dirt for it, he’d be on my ass yelling, “Get back to your banging and scraping blind man!”

The scoundrel had got us to agree to divide The take fifty-fifty, i.e., He would get half and the ten of us would have to split the rest. So I bet you’re thinking, “Well now, doesn’t that sound fair.” And of course we recognized the bamboozle. After all, we’d be doing all the work, making asses of ourselves etc. But here’s the thing: it was his idea. I mean, how could we have known you people would be so easily entertained? The sighted have very strange taste!

Monsieur had also got us our costumes and instruments, such as they were. But he hadn’t warned us about coins being flung at our faces, so after the coin bounced off my face and into the dirt, I decided to do a subtle reconnaissance. It was a delicate operation considering the fact that I was supposed to be playing the fiddle with the stick or whatever it’s called, and all that scraping and banging and yelling and clapping made it pretty difficult to concentrate on the business of my big toe.

Now, I don’t want to give the impression that I’m used to a tranquil or meditative lifestyle. I mean, I live with three hundred blind people who are constantly bashing around and messing with each other. It’s not the Paris madhouse, but it sure can get crazy in here! Still, you cannot imagine how damn loud it was at the Saint-Ovide Fair that night. There must have been a thousand people greedily imbibing our blind buffoonery!

Anyway, while my big toe was still looking around for my coin, I heard Jacques (who was next to me), go “Oof!” I guessed that he’d been hit with a coin of his own.

I was not about to be outdone by that clown, so I wagged my head a little and trotted in place like a dancing donkey. It worked! People banged their tankards and cheered. Encouraged, I wagged more vigorously and trotted with gusto, and yep, brayed out some bits of song too.

All of a sudden the coins came fast and furious, too many to count. For a few exhilarating moments I felt like I had found my calling. I would be an entertainer. Make a ton of money. Delusions of grandeur, as ridiculous as any of Jacques’s, who always comes home from a day’s begging, convinced that the grand lady who’d tossed him a penny would certainly adopt him as her blind pet project.

Case in point: The coins were flying, high velocity, dropping all around. Excited and reckless, I bent over to do, I don’t know, some kind of spastic crouching jogging thing, and slammed my eyeball, such as it was, into the corner of the music stand in front of me.

The music stands had been set up in front of each of us with their sheets of music facing the spectators. Nice comic touch, eh? But I’d forgotten it was there. Being blind is so marvelous.

Anyway, it really hurt. Started gushing. People laughed. But I couldn’t keep up the dancing donkey routine anymore. Besides, now all the guys were dancing. They’d realized it was solid gold. I heard later that Monsieur wanted more dancing as the crowd loved it, but by then I was feeling quite miserable, to say the least.

My mangled eyeball got infected, of course, and for the next six weeks I lay on my cot, certain I was dying. To add to my misery, the guys came back every night from the “Café of the Blind,” as it had been dubbed in our honor, with full pockets, whores, and massively inflated egos. They thought they were made, but I knew it wouldn’t last. And I was right.

After a month the crowds lost interest. Monsieur said thanks but he wouldn’t be needing their services anymore. He told them to run along back to their pathetic lives. (Our pathetic lives.) But at least they got that month. All I got was this stupid empty eye socket.

*This is essay 21 of #52essays2017. Read #20 From Derrida to Diderot: The Philosophe’s Dream to learn more about the history of the education of the blind and The Spectator & the Blind Man*