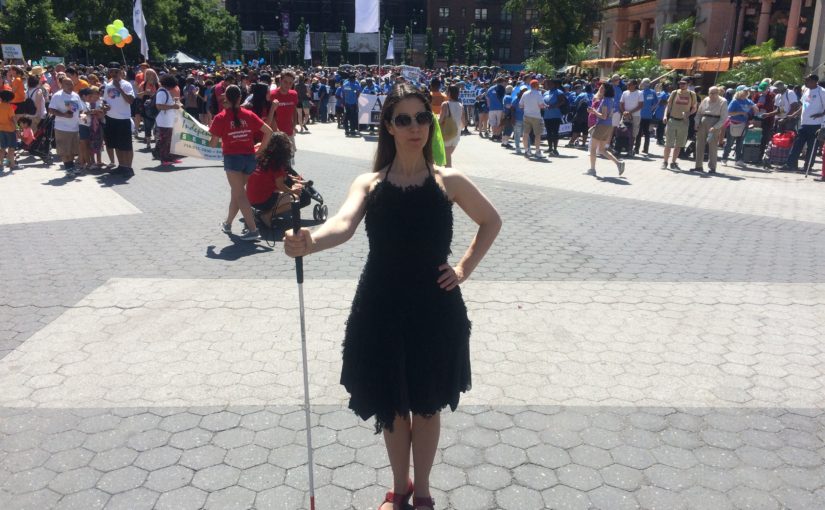 Last year I wrote about why Disability Pride Parades Matter, from a bookish perspective since I unfortunately did not make it to the parade. This year, I did make it and was very pleased to run into friends including my old pals from Lighthouse Guild Music School! They may never forgive me for flubbing my chance to distinguish the Lighthouse from amongst the hundreds of other disabilities organizations in my impromptu loudspeaker announcement, but perhaps this video mitigates somewhat. Anyway, please excuse my excitable camera guy, who got a little nervous when I took the mic–he’s a much better singer composer!)

As an actor and writer for New York Film Academy, I’m acutely aware of the challenges actors with disabilities face. So it was exciting for me and many others to have Micah Fowler of the current hit TV show “Speechless” grand marshal this year’s Disability Pride Parade.

Born with cerebral palsy, Fowler started acting when he was five. In a Vulture interview Fowler said, “I think it is sad that less than 2 percent of actors on screen are themselves actually disabled. Growing up a huge television and movie fan, I couldn’t help but notice the lack of representation of both disabled actors and disabled characters being portrayed on television. So I am so very excited that “Speechless,” a prime-time network-television show, conquers both of those missing links by having both an actor actually living with cerebral palsy as a main character and by having a “character” in the story line living with a disability.”

Although Fowler and other young actors with disabilities such as Lauren Potter who played Becky Jackson on Fox’s hit show “Glee” and Jamie Brewer who played several recurring roles on “American Horror Story,” including Nan in “Coven,” who both have Down Syndrome, offer viewers the glimmer of a new trend of hiring actors with disabilities, things are still pretty dismal.

According to a Variety article informed by a 2016 study released by Ruderman White Paper, “95% of characters with disabilities in top 10 TV shows are played by able-bodied actors,”

The study was commissioned by the Ruderman Family Foundation and took a comprehensive look at employment of actors with disabilities in television, and reveals that “people with disabilities are the most unrepresented minority in Hollywood.”

In all of this, there is a need for activism and a push for hiring practices to shift, but there are also things disabled people can do for themselves by themselves. A good example is marching in disability pride parades, because they bring bunches of disabilities into the public eye.

I could have wished that there were a few more people along the parade route yesterday, but there were a whole lot of people marching, and it felt good, though, I believe it was a little lacking in spectacle–a few too many matching t-shirts, if you ask me. I think we need to rip a page off the gay pride parade handbook. We need costumes and we need floats! I have big plans for a braille dress next year! But of course, Gay Pride has got a few decades on us.

Daryl Mitchell, who stars in NCIS New Orleans, was an established actor before a 2001 motorcycle accident left him paralyzed from the waist down. With support from friends, including Denzel Washington and Chris Tucker, he has continued his career and now stars in “NCIS: New Orleans.” He is an advocate for employing actors with disabilities. In an Ability Magazine interview Mitchell says, “You meet with these Labor Department guys, and you can tell everybody is enthused and ready to go. That’s the main thing, really. Their willingness to fly out from Washington and see us in Los Angeles and speak with us says a lot about them. But it’s really a matter of what we need to do, what we’re willing to do as people with disabilities. We need to be more boisterous. We need to let the world know that we’re here.”

So here’s to boisterous disabled people, costumed and bejeweled, marching in the Disability Pride Parade 2018!

*This is #22 of #52essays2017. Read #21 Bobst Library, the Education of the Blind, and the Buffoon of Saint-Ovide in which I wax nostalgic about my NYU library adventures and another kind of spectacle!*