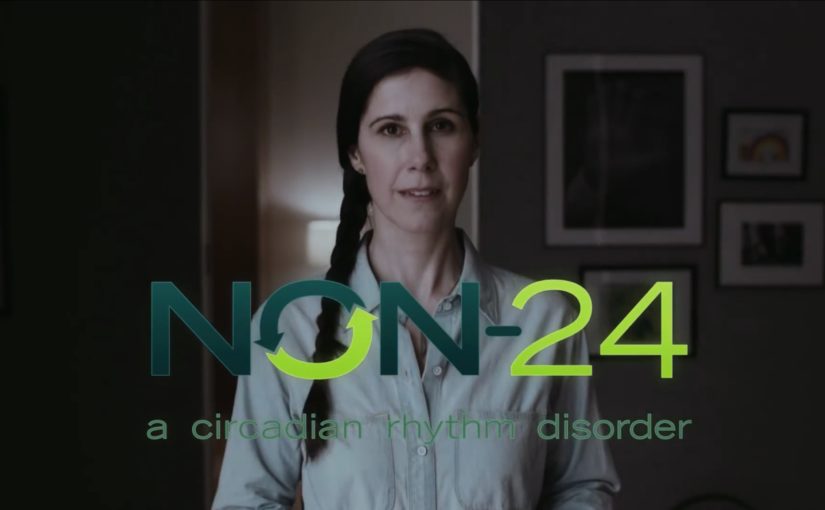 In my last essay inspired by attending the NYC Disability Pride Parade, I presented a small rant on the dearth of actors with disabilities representing themselves on television. And I got to thinking about how, in a troubling landscape, I can say with as few sour grapes as possible, that the blind actor is pretty much non-existent, excepting of course in a certain Vanda commercial starring me!

Blindness is a very weird disability since, without the accoutrements of white cane or guide dog, it doesn’t look like much, which is why, I suppose, I receive comments on the Vanda iSpot page doubting my authenticity. Here’s an example from George:

“Doesn’t look blind to me. Her eyes are following the action. She at least has some vision.”

And another from Rhonda:

“This is an actor!!! They need real blind people. They stopped this one with the actor woman. Now they have an Afganastan [sic] vet.”

For some reason, Ronda believes in the vet, but not me, the assumption is that the vet is a real blind person, which in fact he is. Mike and I shot our commercials at the same time and chatted during lunch once. But why getting blinded in war is more credible than having an eye disease remains a mystery.

I am not alone in being denied authenticity. On Molly’s Dove Shower Foam iSpot page, I read a comment from Roseanne:

And another from Carol:

“Same she doesn’t look hummm noract like any actual blind person I know and I have friends and family blind from infancy to loss of sight from wound in war to elderly! And lost sight even to being diabedic [sic]. She doesn’t appear to act in any way as they do”

Spelling mistakes and typos aside, I accept these comments as representative of a certain percentage of the American sighted population. Happily for Molly (and human kind), there are others who believe. Someone took the time to Google her and discovered her authenticity. From Shelley:

“I googled it and I think her name is Molly Burke and she has retinitis pigmentosis [pigmentosa]. You gradually lose your eye sight when you have that. My grandma had it along with two of her sisters. She was declared blind in 1967 but didn’t completely lose all her sight until 10 or so years later.”

Indeed Molly Burke is authentic and has a popular YouTube channel in which she talks about life with blindness.

I wonder if others in the disabled world get victimized by such able-bodied scrutiny. Probably. And yet there are disabilities that are hard to fake. No one doubts that Peter Dinklage, who plays Tyrion Lannister in Game of Thrones, is the real deal.

Part of the problem is that able-bodied actors have been portraying and often winning Academy Awards for their performances of disabilities for so long that seeing someone who is actually disabled defying stereotypes–not looking blind, for example–that when they see the real thing, they doubt the authenticity and somehow feel duped. It’s odd that people cannot imagine a real blind actor, but only real blind people, as if actors were not also people.

For my Celebrating People With Disabilities in Film and Television article I wrote for NYFA earlier this month, I was delighted to find enough actors with disabilities that I could not fit them all into my space limitations. However, beyond the TV ads, I had to stretch for a blind actor.

Kitty McGeever starred in the long-running “Emmerdale,” but sadly died age 48 as a result of many health issues. McGeever was the first blind actor to star in a British soap. Having trained at RADA, she lost her sight at the age of 33, shortly before winning her role on “Emmerdale.” She described her character as “naughty” and “manipulative in the extreme” to the BBC, and added, Lizzy “uses her disability to her advantage and then disregards it to her advantage whenever and whichever way she chooses.

When I was called to audition for the part of Reba on NBC’s Hannibal, I dreamed of not just the stardom and money, but the idea of doing talk shows and the like, speaking as myself to a mass audience of sighted people about my particular flavor of blindness. How delicious, I thought, and important, to offer a perspective that might not square with the usual perceptions! I also imagined insisting on the importance of having people represent themselves on TV, providing more nuanced and authentic representations, representations that have behind them, at least to some extent, experience that reaches beyond stereotypes. This is important not only regards viewers but also the immense cast and crews on a television or film set.

The director of the Vanda ads, Malcolm Venville, told me on our first day of shooting that how I moved was so interesting. That it was so different from how a sighted person moved, and yet subtle and not what you see in the media–not superhuman and not slapstick. The cast and crew’s experience of a blind actor can only help to explode stigmatic portrayals. There is hardly a mainstream blind actor working today, and yet the portrayal of blindness is practically a staple on the TV series, where main characters are struck blind at alarming rates, usually just before jumping the shark–yes, I’ve got Fonzie’s Blindness in mind.

But things they are a changing, and I’m excited for the blind kids coming up. Soon, I hope, it will be as frowned upon to have a blind character played by a sighted as to run around in blackface. But for now, we must be satisfied with pharmaceutical ads and training videos… Below you can watch my friend George Ashiotis and I tell poll workers how to treat people who are blind!

*This is #23 of #52essays2017. Check out #22 Disability Pride Parades Matter 2, about my happy march up Broadway flying my freak flag with thousands of others!*