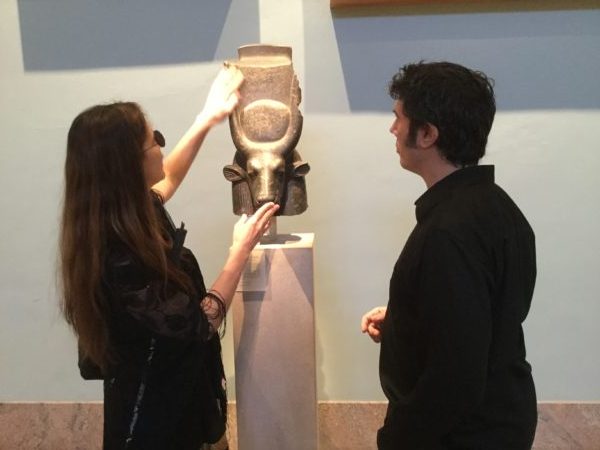 *Recently Artsy reached out and reminded me of this article (written last August) and the importance of art accessibility. Also, I should note that things are continually improving, as exemplified by my friend Claire Kearney-Volpe who offered a Co-Lab through the NYU Accessibility Project, to help Cooper Hewitt bring art accessibility to their design museum*

“You can’t touch the artifact!” said a female voice in an urgent museum whisper. In fact we’d been directed to the pieces in The Met’s Egyptian collection that are touchable by blind patrons by another museum guard, who clearly had great love of his job generally, and this aspect of it in particular. He shushed his alarmed colleague and explained to her about art accessibility. You’d think all the guards working the Egyptian wing would be informed of this unique aspect, or at least that they would have looked at the exhibits they were guarding over and learned what the signs clearly state, but people don’t read.

My boyfriend Alabaster told me that several people stood staring aghast during the course of our tour, and that one woman nearly screamed when she saw me with my hands on a sarcophagus until her husband pointed out the braille title card and the printed sign explaining that the object may be touched by BLIND PATRONS ONLY to enhance their museum experience.

You may be jealous and confused, but don’t be! Out of the approximately 26,000 artifacts in the Egyptian collection, only a handful may be touched. The rest must be explained verbally, which is just not the same thing.

I have been on several “sense” tours at NYC museums over the years and, while I appreciate the impulse, it often feels like they are phoning them in in order to check the accessibility box. Take for example a sense tour at The Met wherein our tour guide described almost every object as “very colorful.” Or the time at MOMA, when, at the top of a tour of Soundings, an exhibit of contemporary sound art–perfect for blind people right?–we found ourselves sitting on portable stools in front of a silent piece–the only silent piece of the exhibit–with a tour guide who, in an effort to encourage us to commune with the art, sat on the floor with her back to us and began to meditate.

I haven’t a very long fuse for the unbearable and soon I was fuming, not the least because I could hear the happy buzzing and whirring and chattering of a dozen or so other pieces–and as you may have noticed I like soundscapes a lot! Still, I felt somehow guilty for not appreciating the effort, so instead of having a tantrum, I handed my headset to the tour coordinator, claiming a terrible back spasm, and Alabaster and I got out of there to enjoy the museum in our own way.

He described in great detail some of his favorites–Paul Klee and Piet Mondrian –and I was able to ask questions when I didn’t understand. Even though I used to see and can readily access visual memories, I find it difficult to assemble descriptions into an art object visible to my mind’s eye. But, with great effort, enthusiasm and empathy on the side of the describer, and intense and artistic concentration on the side of the listener, it can happen that a heretofore-unseen object can manifest in the mind’s eye and occupy mental space as vividly as any object once-seen. As with all translations, this one is not perfect but it is wonderful.

Friends of ours with a similar dynamic–Caroline (visually impaired) and David (sighted)–went to Paris and were delighted to find that all museums were free for blind people. It made so much sense that this should be the case, since, really to get anything out of the museum experience, only a few objects can be described and integrated at a given visit. There are no cursory glances for blind people. All must be savored and chewed slowly if it’s to make any impact, and so what might take a sighted museum-goer a single trip to see, could take several for a blind person and her trusty describer.

Back in the states, it never hurts to ask about art accessibility. At the Whitney, we were pleasantly surprised when, upon asking if there’s a discount for blind patrons, we received the good news that it would be free for me–whether this was policy or not was unclear, but it was nonetheless welcome and, in addition to having a fine time talking through the art, with many articulate gestures on the one hand and far-flung questions and analogies on the other, we apparently attracted attention. More than once, Alabaster caught strangers filming or photographing us.

Which brings us back to our Met tour on Saturday in which I was able to touch Ancient Egypt. It was really cool to feel the mane of the lion goddess, and squeeze the nose of a king’s sarcophagus, but my favorite part of the tour, and the reason it far surpassed the tour the Met organized a couple years back of the very same objects, was spending time reading the hieroglyphs with the help of our personal Egyptologist (and voiceover artist extraordinaire), Lloyd Floyd.

Before we learned which artifacts I could touch, we started the tour at a colossus where Lloyd Floyd described the pharaoh’s many titles, spelled out in hieroglyphs, and I found it difficult to concentrate, but later, with my hands on the hieroglyphs, the meanings that he explained corresponded to a sense impression–just as you, my dear sighted reader, may take information in through your sense of sight while listening to information regarding that description.

That’s not to say that, as mentioned above, it is not wonderful to receive a description of an art object, but it takes a long time, and when the description of what is seen comes at you alongside esoteric context, the brain easily boggles! However, with my hand on the hieroglyph my ear became very attentive. Besides, feeling the shapes and being able to participate in the discussion of whether the thing under my fingers, and their gaze, represented, as the archaeologists claim, a horned viper or, as our senses suggested, a slug, was a precious moment, not to be underestimated.

Not all museum pieces are made of virtually indestructible granite, but there are other ways of creating environments of art accessibility. Through models and replicas and many other ingenious tactile analogies as described in an article at Art Beyond Sight. Mentioned in that article is a brief warning to be careful not to make the experiences segregated:

frequently in an alternate space. It is crucial that this not become a “segregated” program, but rather a supplementary educational approach to gallery programming.”

I agree with this, and believe the experience of others to my even being in a museum makes the whole experience educational in a multi-faceted and fun way–nothing like freaking out sighted people on a Saturday afternoon at The Met!