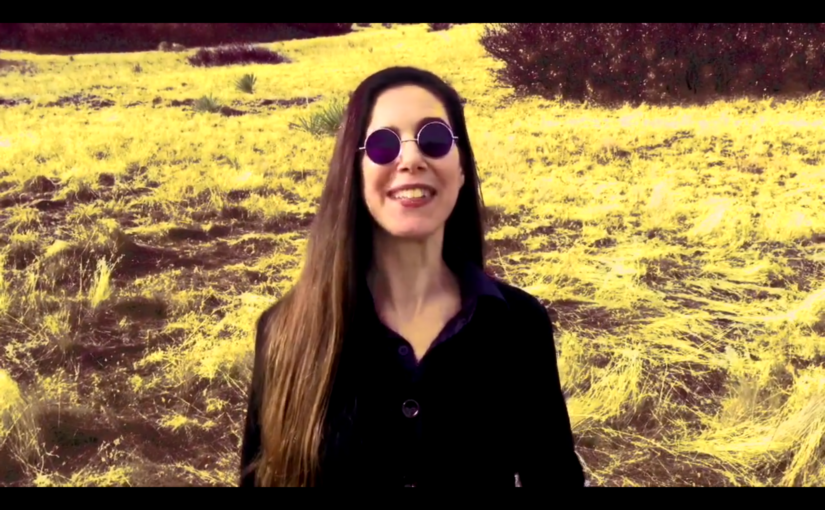 I learned about the Holman Prize from my Friend Laurie Rubin last year, but did not have the time, nor a clear project to pitch, but this year I was ready and waiting!

I managed to talk Alabaster into being my videographer, and we learned so much in the filming and editing of this little video, that I’m pleased to leak the possibility of some Alabaster Rhumb music videos coming soon… Speaking of Alabaster’s music, it is his song “Bird in a Tree,” that plays in the background of my Holman Pitch video, sped up and with a French horn taking the vocal line.

I also enlisted my long-time film collaborator, David Lowe, to help with the audio described intro sequence, but he went far beyond the call of duty by adding magic to our final cut, including somehow making our rather uninspired hill appear truly golden!

And without further delay, I urge you to watch, and like (the social media winner is guaranteed a spot in the final round of the competition), our 90-second Holman pitch video:

What is the Holman Prize?

The Holman Prize is the amazing brainchild of Lighthouse for the Blind and Visually Impaired in San Francisco, which was coincidentally the first blind organization I ever had anything to do with, as I grew up and started losing my vision in that city. For a little more on those early days of visual impairment, check out In the Beginning Were the Eye Doctors.

In fact, I even volunteered one summer at their Enchanted Hills Camp, which was partially destroyed in the recent California wildfires, so please consider a donation to that worthy summer camp for blind and visually impaired children and adults.

Last year was the first of this annual international competition, which awards up to $25,000 to each of three blind or visually impaired winners to help them make their dream projects come true. Here’s a short video about the 2017 winners:

The pitch video is the main component of the first round of the Holman Prize competition, which also includes a written application with short answers that helps to give context to the video, and introduce the candidate and her project.

So I thought I’d include some of my application answers here, just in case you also would like to have my pitch video contextualized!

Enter the basics of your project and give us any details that aren’t in your video pitch. Max 200 words.

Aromatica Poetica is my new magazine dedicated to the arts and sciences of smell. It is not especially for blind people, but, as a blind person connected in the community, I will encourage blind and visually impaired writers. Thus, the annual writing contest is vital to this project, which seeks to offer an alternative to sight-centric writing.

With the Holman Prize, I’ll be able to publish the first issue and have a launch party. I feel confident that after that initial issue, we’ll be self-sustaining and eventually profitable. The advertising possibilities are endless: fragrance, wine, spices, sweets, coffee, tea aromatherapy…

The trip component is inspired by James Holman, and will seek out strange new smells–from flowers and wine to volcanic rock and olive oil. It will provide the fodder for the feature story for the inaugural issue of Aromatica Poetica.

In the making of this pitch video, I’ve developed a healthy appreciation of audio description. I would have liked to provide more, but 90 seconds is not very long. For you blind judges out there, please know that I’m toasting you with a lovely-smelling glass of red wine at the end, and that accessibility is always on my mind.

Tell us a little about yourself: write a short bio, tell a funny story, tell us about your passions, or do whatever you like! We want to know who you are. 150 words.

I received my PhD from NYU in 18th century English Literature, then promptly turned around and wrote and produced two plays: about Helen Keller’s time on Vaudeville, and about the sexy history of the invention of braille.

As an actor, I’ve landed a national commercial as well as other smaller gigs. As a writer, I’ve written for O Magazine, just sold a story to Playboy, and have work in many less notorious literary and commercial publications. As a publisher, I’ll be able to encourage diverse voices and aesthetics.

Smell, “the fallen angel,” as Helen Keller put it, has become a passion of mine since metamorphosing from visually impaired to blind, and I want to share that passion. Smell needs vocabulary and great writing–fiction, nonfiction, poetry. The underdog sense can expand the world of blind and sighted alike, and Aromatica Poetica is here to help!

If you plan to travel, please enter those locations in a simple list.

I have a cone rod dystrophy that started when I was ten, which has, very slowly, pushed me along the sight/blindness spectrum from normal sight to near complete blindness. Most of my life was spent as a visually impaired person, but in the past few years–perhaps 5 or six, I have considered myself a blind person, as I have no usable vision. These days, I can see an occasional chink of actual light in my far periphery, but other than that, it’s all kinds of pixelated snow fuzz with occasional hallucinations, courtesy Charles Bonnet Syndrome.

Ok, that’s it! What do you think? Before you decide, I suppose I should invite you to check out my competition…

Cheers to all the blind ambition in the world!