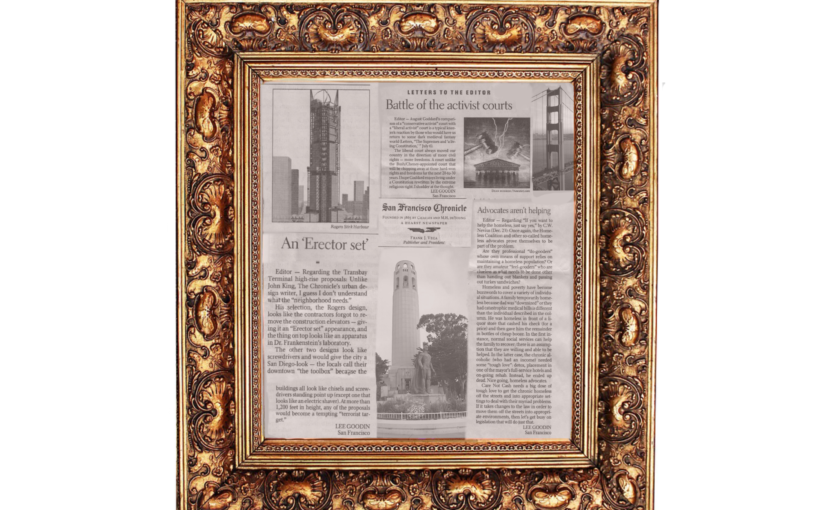 On the first anniversary of my father’s death, I’m grateful to my stepmother for sending me three of his letters to the editor, clipped from the San Francisco Chronicle. One of them—from August 19 , was published eleven years to the day before his death. It’s humor apparently hit the mark, as the editors used his words “erector set” to title the section. My dad was not alone in abhorring the proposed building sketches, he just said it best! This letter and the others remind me how much he changed in his last years, and how much he stayed the same.

Once, during one of our “liquid lunches”—sitting for hours drinking (and eating) in the window booth of Fior d’Italia—which we indulged in every time I visited San Francisco, he mentioned that he had an idea to put all his letters to the editor together and write a book around them. I encouraged him, but did nothing to forward the ambition. A couple years later, when he was feeling much more downcast, much more sedentary, and house-bound (except for Fior downstairs and the doctors), I asked him about the idea, and he shrugged it off as something that was no longer interesting to him, or no longer possible. I don’t know that I’ll ever be able to fulfill that particular book idea, but at least I can share his words here.

In the three letters from 2007, his interests range from the homeless to the monstrous aesthetics of a planned skyscraper to expressing his fears about a radical conservative court—a painfully prescient thought.

In these concise bits of his politics, my dad’s witty and reasonable voice talks to me from his tumultuous watery grave in San Francisco Bay, reminding me that, although in his last years he took little pleasure in the arts or travel that he’d once loved so much, he never stopped thinking about politics at the local and national levels.

To be sure, since 2016 at least, things were going in a direction that once would have made his blood boil, but at the end just kept his mental state set to a slow burn. The upshot being that his impending death seemed less dire than it might have if Trump had not soiled the White House.

My dad had his opinions till the end, even if he lost some of his fighting spirit. As you can read in my personal obituary for him, or in this essay I wrote a few months before his death. In his last years, his body made war on him, and there was not a lot of energy left for politics. Even so, his interest could not be extinguished. There was at least enough curiosity to know how bad things were going to get him out of bed every morning—despite the considerable pain—and into his wheelchair. Then he’d belly up to the dining room table, where he’d spend hours grumbling and griping over the newspaper in his endearingly grumpy way.

Battle of the activist courts

Editor – August Goddard’s comparison of a “conservative activist” court with a “liberal activist” court is a typical knee- jerk reaction by those who would have us return to some dark medieval fantasy world (Letters, “The Supremes and ‘a living Constitution, ” July 6).

The liberal court always moved our country in the direction of more civil rights more freedoms. A court unlike the Bush/Cheney-appointed court that will be chipping away at those hard-won rights and freedoms for the next 20-to-30 years. I hope Goddard enjoys living under a Constitution rewritten by the extreme religious right. I shudder at the thought.

Editor – Regarding the Transbay Terminal high-rise proposals: Unlike John King, The Chronicle’s urban design writer, I guess I don’t understand what the neighborhood needs.”

His selection, the Rogers design, looks like the contractors forgot to remove the construction elevators-giving it an “erector set” appearance, and the thing on top looks like an apparatus in Dr. Frankenstein’s laboratory.

The other two designs look like screwdrivers and would give the city a San Diego-look—the locals call their downtown “the toolbox” because the Rogers Stirk Harbour buildings all look like chisels and screw- drivers standing point up (except one that looks like an electric shaver). At more than 1,200 feet in height, any of the proposals would become a tempting “terrorist target.”

Editor – Regarding “If you want to help the homeless, just say yes,” by C.W. Nevius (Dec. 23): Once again, the Homeless Coalition and other so-called homeless advocates prove themselves to be part of the problem.

Are they professional “do-gooders” whose own means of support relies on maintaining a homeless population? Or are they amateur “feel-gooders” who are clueless as what needs to be done other than handing out blankets and passing out turkey sandwiches? Homeless and poverty have become buzzwords to cover a variety of individual situations. A family temporarily homeless because dad was “downsized” or they had catastrophic medical bills is different than the individual described in the column. He was homeless in front of a liquor store that cashed his check (for a price) and then gave him the remainder in bottles of cheap booze. In the first instance, normal social services can help the family to recover; there is an assumption that they are willing and able to be helped. In the latter case, the chronic alcoholic (who had an income) needed some “tough love”: detox, placement in one of the mayor’s full-service hotels and on-going rehab. Instead, he ended up dead. Nice going, homeless advocates.