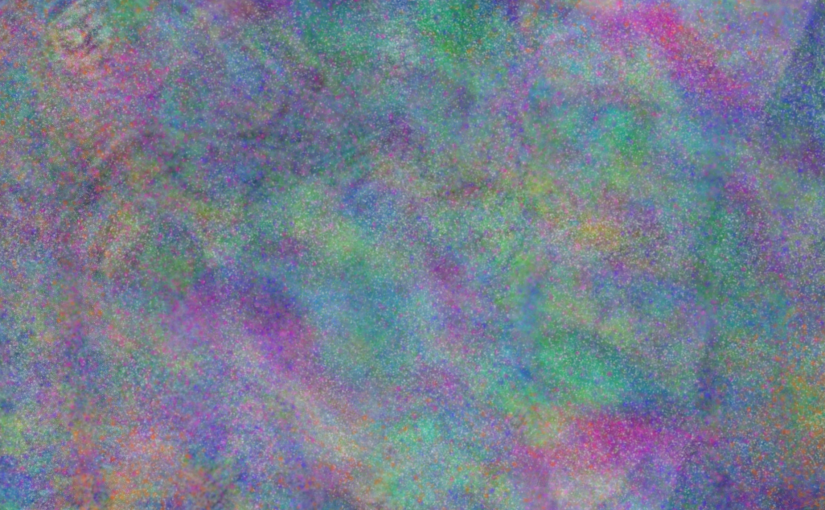 When I had central vision loss I never saw a black hole—any more than sighted people “see” their blind spots… Now that I’m totally blind, I see colorful hallucinogenic pixelated snowfuzz–still no black!

I was curious to know what other bplindkind see, so I asked Facebook and here are some responses—consider adding yours in the comments below!

Vibrating, pulsing, colorful swirling lights. Also images, which are now called a thing, Charles Bonnet Syndrome, which people apparently suffer from and go to support groups for and all. I always thought it was a good thing.

ha, never heard of the support groups… I like my Charles Bonnet Syndrome, too!

Here’s just one example of how CBS is framed as traumatic. https://www.aao.org/…/what-is-charles-bonnet-syndrome

Or just Google Charles Bonnet support group. I was aghast when I first saw this because my feelings about it ranged from just enjoying the show to appreciating it as a gift. But I also had a totally different opinion about what’s going on. Note, I’m pretty sure the “cause described here is just theory. I’m not convinced that’s all there is to it. Also, I first thought this reaction was typical of the older newly visually impaired crowd, since we old people are supposed to be less open to change. But I saw something recently about a study being done in the UK something to do with anxiety among young people with CBS. Whatever it is, I wonder what would happen if the involved ophthalmologists congratulated kids for having it and told them it was a gift, instead of just one more problem to deal with.

thanks for this and I totally agree that pathologizing might be an issue here… I was excited when I first read about CBS in Oliver Sacks’ Hallucinations — happy to put a name to what I’d experienced!

I’m writing this up into a little blog post–can I quote you?

Of course. Sometimes it’s pretty distracting, but mostly it’s actually really cool. It happened after I started losing a lot more of the sight I had as a child. So once again I can see colours and designs. It’s usually a different design each day and I often think it would be neat to create art to show others what I’m seeing. As a lifelong artist, mind art is like the coolest thing I can think of. I no longer see but I see so much in my head.

I believe I have the syndrome mentioned above as well. But the way you described it is about what I see as well. Very fuzzy no details and colors that sometimes don’t make any sense 

I describe mine in the book as swirling, kaleidoscopic fragments of green, yellow, and magenta, moving like a time-lapsed image of a distant galaxy, which Norton’s art director, who designed my cover, which I adore too much to quibble with, took to mean black like most representations of outer space. Thus, the blind spots on the Blind Man’s Bluff cover are black, which doubtless has more visual appeal and holds text more clearly than swirling mixes of color would. But I’ve had to qualify intros of my cover with statements that it’s the artist’s interpretation rather than what I actually see in my blind spots.

I think I remember you telling me that, and I definitely remember the description in the book! I recently came across something on Instagram that claimed to show sighted people what central vision loss was like, and from the description it seemed like it was a big black blob moving along one’s visionscape blocking everything in the center and I was like, that doesn’t sound quite right, at least not in my experience or yours or others, too!

The same as you in my left eye. My right eye is absolutely nothing, not even black. But I never had any sight in that I at all. My left eye I lost the sighting as a teenager. I have now had both my eyes removed and nothing has changed. I don’t call it Charles Bonnet syndrome because that seems to refer to identifiable objects such as a brick wall animals or faces. Most of the time I don’t mind it, I worried I would lose it when I had my eye removed, but it’s still going strong. There are however some days when they seem to be extra dark in colour, and somehow feel like they’re very close to my eye and almost irritating me in my way. Quite hard to explain, but they somehow make me feel more blind on those days. Not that I am any more clumsy, it just feels annoying. There have also been the odd occasion when they have all turned painfully bright but that hasn’t lasted for long 

I’ve lost central vision in my right eye. I don’t see black , it looks more like someone smudged it with their thumb. It’s scarring in my macula. But after the initial injury, I would see Technicolor light shows in the dark.

What I see is a borderless (because I never saw borders) presentation of colors / light … that trends differently in each eye: orange-yellow on the lower left in my left eye with green-blue darker hue above, and pink-orange in the right with nothing above. I can sort of control this if I eye-press and concentrate, but I have never been able to make it do what I want. It is too bright sometimes, in a fantastically intrusive way, I once had a doc sort of suggest he could eliminate this with an alcohol injection to to my optic nerve: and I have sort of considered this. But, I would rather take control of it myself: it’s a brain function: it seems to me that I could learn to control it if I took the time? But, I have never met anyone with the same sensations who has the same inclination: I like color; I do not like being blasted all day and all night with random sensory impressions… Also, injecting anything that close to my brain seems wildly problematic!

Some responses from sighted friends…

This is interesting! Visual imagery occurs in part of the brain, not actually the eyes, even though the eyes are the usual modulators.

I once had the opportunity to do hypnosis on someone wired up to an EEG machine. Apparently, when people close their eyes, the visual portions of the brain usually become inactive, but when I elicited visual stuff, the experimenters were surprised that portion of the brain lit up like the subject was watching movies with her eyes!

I’m curious if you’ve ever tried to control your visual phenomena?

that’s cool! Yes, I write quite a bit about the visual cortex in There Plant Eyes. How the brain plays a role in both seeing and also how the visual cortex can be co-opted by touch and by hearing in the case of blind people who read braille and/or use echolocation–even can be usurped in a matter of days by those who are blindfolded. I do not have a lot of control over the hallucinations, although I’ve found that smell can alter the color wash…. Conscious imagery has a different quality, but no less fascinating as well!

And this one from Jim Melloan inspired the featured image for this post: 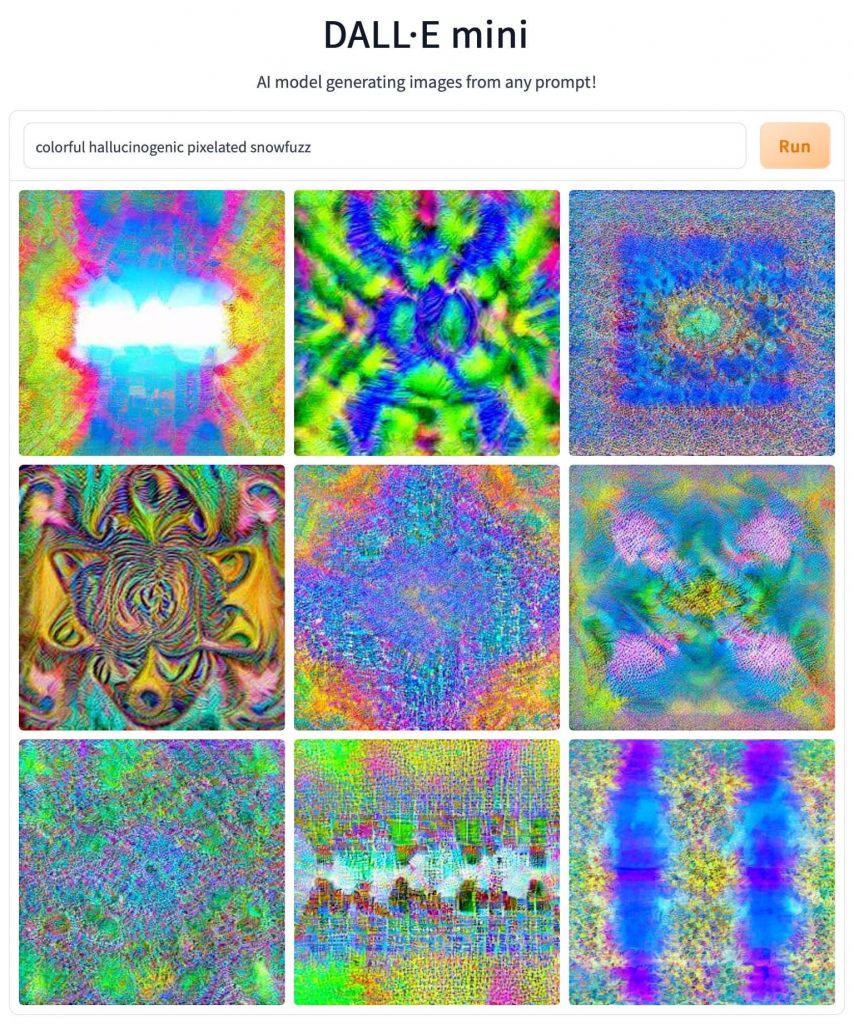 These look like those 1990s stereograms that you had to cross your eyes to see a “hidden” image, which I couldn’t see because I’m legally, though not fully, blind in one eye.

Thanks Jim for alerting me to the Dall-E Mini Image Generator—now called Craiyon!

Plugging the words “Colorful Hallucinogenic Pixelated Snow Fuzz” into the Dalle-E Image Generator (now called Craiyon) produced nine square images, which I asked Alabaster to manipulate into one landscape composite in order to give the impression of sight—because our eyes see in a landscape format, which is why movies are horizontal rather than vertical.

I should add that I left out the word “undulating” in my quick description. That with the vibrating quality means that my visionscape is not static as the image indicates. Rather, the whole “Colorful Hallucinogenic Pixelated Snow Fuzz “ is in constant movement.

I’d love to hear more descriptions from blind and low vision folk, so please respond in the comments below, or email me: leona@drmlgodin.com.