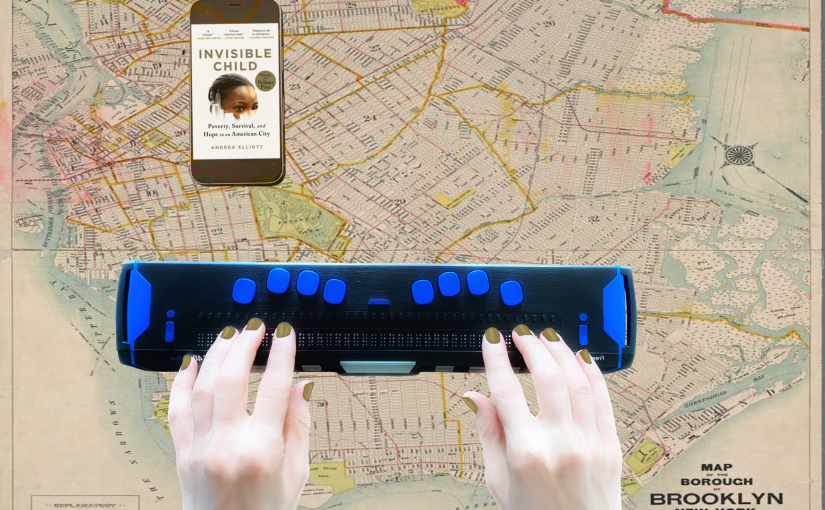 Andrea Elliott was recently announced as the Pulitzer winner in nonfiction for Invisible Child: poverty, survival, and hope in an American city (Random House, 2021). I was honored to have a conversation with her during the Virtual Monster Book Tour for There Plant Eyes. During that conversation and others over the past couple years, we’ve talked about visibility and invisibility. The title of Andrea’s book came from Dasani’s feelings of being unseen in a city that’s all about visibility and bling. Dasani did her best to spin her invisibility into a superpower, but the gravitas of this book has everything to do with how those who have much prefer not to see how brutal life can be for children living in extreme poverty.

Dasani is the main character in Andrea’s vivid narrative, but her siblings and parents—as well as welfare workers and foster parents—play major roles in this sweeping indictment of a city that prefers to look away from systemic poverty. As Invisible Child describes in excruciating detail (backed by meticulous research), laziness and ineptitude have little to do with it, as those who subscribe to the “pulling yourself up by your bootstraps” mentality would have us believe. Throwing blame at people for their homelessness, lets those of us who have homes off the hook.

This mentality is not unrelated to something we often speak about in the disability community: When society puts all the emphasis of achieving “despite one’s disability” on the individual rather than the society, then those who fail to achieve are blamed for our lack of initiative. We are pummeled by the “inspirational” stories of “overcoming adversity.” These inspiration-porn narratives make nondisabled people feel good because they don’t have to do anything to change their ableist attitudes that resist making the world accessible and inclusive. “Pulling oneself up by the bootstraps” is such a dangerous and silly stance to take when what mostly holds disabled people down is not about us as individuals but about us living in a world that is intolerant and hostile to disability, as if we were not all vulnerable to sudden or gradual bodily changes that affect mobility, our senses, and self-sufficiency. Our society tends to look away from disability as it looks away from poverty.

So what happens when extreme poverty meets disability? We glimpse an answer in Invisible Child through the perspective of one of Dasani’s step-siblings, Nana, who is partially blind and who gets trapped between her own and her family’s desires to “cure” her vision problems and the institutions  that would help her adapt to blindness, namely a school for the blind. However, in order to adapt and become the best blind person one can be, one must get over the stigma of blindness…

Nana trails behind, her glasses fogging over. She has always been the orchid in this bunch of daisies, the most delicate and sensitive child. With each passing year, Nana’s blindness advances, though she can still make out vague shapes and colors. She copes by getting “lost in a wonder world,” Chanel says. “She separates herself a lot.”

She can play with her doll for hours. She loves fantasy books like The Wreck of the Zephyr by Chris Van Allsburg, whose name Nana says with precocious reverence. Among her siblings, she tries to fit in. She calls her stepmother “Mommy.” She tries to mask her blindness,[i] resting a hand on Lee-Lee’s stroller so as not to stumble.

[i] The attempt to hide one’s blindness is at once the most universal and most debilitating response to vision loss. As I discuss in There Plant Eyes, ableism and stigma keep us from being the best blind people we can be:

Throughout my twenties, before I got paired with my first guide dog, I refused to use a cane. Even though walking around at night was scary and dangerous, I still refused the cane. Even when I knew that it was stupid and that I should really use the cane, which I even began to carry in my bag, I would not pull out that stigmatized object. I’d just hold my breath and do my best to avoid bumping into people and to follow the street lamps in as near to a straight line as I could.

It’s so glaring to me now that so many of us fear the look of blindness more than we fear for our lives; I think that is a huge part of why I felt the need to write this book. Being blind offers challenges, no doubt, but I believe I do not exaggerate when I say that one of the biggest challenges is throwing off the shackles of stigma.

*This is the second in my new series of “Footnotes on Books”—my answer to the book review—because there’s just too much to say about books I love! Check out my previous “Footnote on Lessons in Chemistry” HERE.