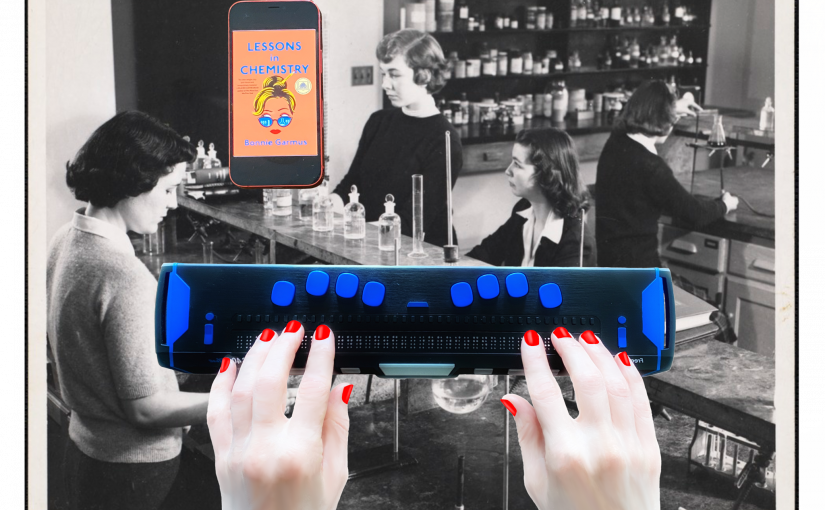 Lessons in Chemistry (Doubleday, 2022) by Bonnie Garmus is funny and charming despite the brutal 1950’s sexism—a sexism which, even if less systematic and unapologetic, will still resonate with most women today. You can’t help but fall in love with Elizabeth Zott, who is hilarious in her seriousness about chemistry, love, family, cooking, and everything else. Ad to the formula a very clever dog name Six-Thirty, a precocious daughter named Mad, a helpful minister, an anxious daytime television producer, and a neighbor lady who will learn to be a modern woman, you have a delectable concoction of a novel.

Speaking of that neighbor, Mrs. Sloane, here she is visiting Elizabeth’s home lab where she’ll get the best cup of coffee she’s ever had…

“I’ll make it,” Elizabeth said. As Mrs. Sloane watched, Elizabeth drifted to the stainless-steel counter, where she picked up a jug of distilled water and poured it into a flask, plugging the flask with a stopper outfitted with a tube wriggling from its top. Next, she clipped the flask onto one of two metal stands that stood between two Bunsen burners and struck a strange metal gadget that sparked like flint striking steel. A flame appeared; the water began to heat. Reaching up to a shelf, she grabbed a sack labeled “C8H10N4O2[i],” dumped some into a mortar, ground it with a pestle, overturned the resulting dirtlike substance onto a strange little scale, then dumped the scale’s contents into a 6- x 6-inch piece of cheesecloth and tied the small bundle off. Stuffing the cheesecloth into a larger beaker, she attached it to the second metal stand, clamping the tube coming out of the first flask into the large beaker’s bottom. As the water in the flask started to bubble, Mrs. Sloane, her jaw practically on the floor, watched as the water forced its way up the tube and into the beaker. Soon the smaller flask was almost empty and Elizabeth shut off the Bunsen burner. She stirred the contents of the beaker with a glass rod. Then the brown liquid did the strangest thing: it rose up like a poltergeist and returned to the original flask.

“Cream and sugar?” Elizabeth asked as she removed the stopper from the flask and started to pour.

“Mother of god,” Mrs. Sloane said as Elizabeth placed a cup of coffee in front of her. “Have you never heard of Folger’s?” But as soon as she took a sip she said no more. She’d never had coffee like this before. It was heaven. She could drink it all day.

[i] This is the chemical formula for caffeine. One may assume that Elizabeth means this as a cheeky synecdoche, as she would certainly know that caffeine by itself is a white crystalline substance, not a fragrant dirt-like one. She’d also likely know that a typical brewed cup of coffee contains only 40mg of caffeine for every 100g. According to Wikipedia, caffeine is the world’s most widely consumed psychoactive drug. Elizabeth probably would know that it’s a central nervous system stimulant of the methylxanthine class.

Caffeine on its own is bitter, but our flavor associations with it have everything to do with where it came from: a coffee bean, green tealeaf, or lab. In the case of the coffee bean, which is really a seed, much depends on the roasting which happens at temperatures from 430°F to 500°F (220°C to 260°C), according to Harold McGee in his super chemistry-geeky book, Nose Dive (Penguin Press, 2020). In conclusion, let’s hear a little of what he has to say about the chemical constituents that contribute to that oh-so-delicious coffee flavor:

Different “roasting profiles,” or temperature-time paths, produce different flavor balances in the finished beans. Light roasts are sweet and bready from the predominance of furan rings, while the darkest roasts have the singed flavor of guaiacol and phenol from breakdown of defensive phenolics. Medium roasts emphasize the landmark aroma of coffee proper, which is largely created by sulfur-decorated furan rings and related thiols. Furfurylthiol, the “coffee mercaptan,” smells like roasted coffee and lends the same note to meats and toasted sesame seeds. Methyl furanthiol is a defining volatile in cooked meats, and some other coffee thiols also have an animal sulfurousness. Lesser contributors to medium-roast coffee aroma are nutty pyrazines, an earthy methoxypyrazine from the raw bean, phenolic-ring vanillin, and a couple of guaiacols with clove-like, spicy smells. Light- and medium-roast coffees can also carry flowery and fruity notes from the terpenoid linalool, and occasionally the decorated phenolic ring aptly known as the raspberry ketone.

*Author’s note: This is part of my new series on books I love. If you’re familiar with Aromatica Poetica, my online magazine dedicated to smell and taste, you have some idea why I picked this one to begin. Please let me know what you think of this.