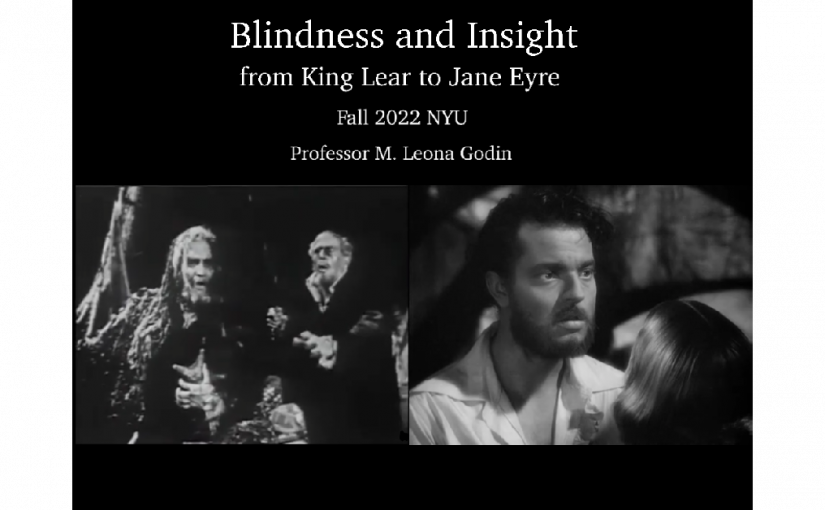 For the first time, I’m designing my own course for NYU: “Blindness and Insight from King Lear to Jane Eyre”! Those who’ve read There Plant Eyes may guess some of the subject matter, but I’ll go a little more deep theory in the classroom. This link is to the current course offerings, in the English dept, but you have to click another link to view the entire spreadsheet that includes electives, of which mine is one. So I’ll paste my course description here:”

Out, vile jelly!” cries the villain Cornwall in Shakespeare’s King Lear as he plucks the second of Gloucester’s eyes, which provokes the gullible father’s journey to understanding and insight. The trope of exchanging physical sight for spiritual sight draws on a long tradition from the legendary Homer and the tragedy of Oedipus to the Biblical blind man made to see. Blindness enters the Modern Era with renewed vigor as the microscope and telescope extend human vision into new realms and medical “miracles” offer “restored” sight. In this course we’ll read literary, philosophical, and scientific  texts of the 17th through 19th centuries by authors including Shakespeare, Milton, Locke, Swift, and Brontë, alongside critical, theoretical, and autobiographical texts on blindness and disability by authors including Michel Foucault, Jacques Derrida, Jorge Luis Borges, Lennard Davis, and Rosemarie Garland-Thomson in an effort to investigate and interrogate the metanarrative of blindness.

The students are smart, engaged, and laughed at all my jokes, so what more could I ask for? All kidding aside, we had a great first day and there is a lot of variety among the students with respect to majors/minors/double majors: English (as you might expect since this is an English class cross-listed with Disability Studies), also theatre, psychology, philosophy, politics, film and television, French, German, and journalism.

Since it’s a brand new class, I decided to find out what they thought of my syllabus in kind of a sneaky way: as part of their introductions, I asked them to look over the texts we will be reading and say which they were most excited about and which they were least excited about or intimidated by. I went first and told them my name, pronouns, PhD stuff, and that I was most excited that we have, thanks to DeafBlind poet, essayist, and educator John Lee Clark, a couple of DeafBlind selections to go along with Charles Dickens’ American Notes where he describes meeting Laura Bridgman (This account was what sparked Helen Keller’s parents to hope their little wild child might be educated.) And I told them that although I’d read a lot of heavy theory as a grad student, I’ve never taught Derrida or Foucault, so we’ll muddle through those together.

Along those lines, I mentioned that since this was the first iteration of this class, they should let me know if they feel like the readings are too hard or too much, or the opposite. Anyway, it was gratifying to find that many students had opposing opinions regarding the texts we’ll be reading, although I must admit not too many were thrilled to deal with poor old Milton. But I said it would be problematic to teach a class about blindness and literature pre-twentieth century and leave him out. They agreed.

Next week we begin in earnest with King Lear and  the spectacular eye-plucking of Gloucester: “Out, vile jelly!”

Two images from black and white film versions of King Lear (1953) and Jane Eyre (1943) topped with the course name, my name, and Fall 2022. Both feature Orson Welles: he stars as Lear with Frederick Worlock as blinded Gloucester on the left, and in Jane Eyre, Welles plays blinded Rochester opposite Joan Fontaine. Gloucester is reaching out with his staff, his eyes in shadow, and Rochester is blank staring clear over Jane’s head although she’s right in front of him!