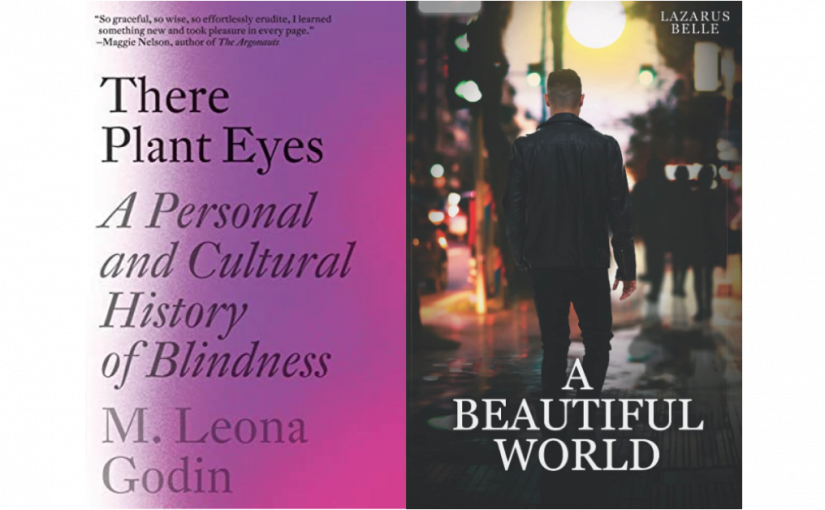 Every author knows how important reviews are, and although we all like to hate on Amazon, it’s a very good place for finding and publishing public reviews. Of course Goodreads is the other biggie. My friend and fellow author published this thoughtful review of There Plant Eyes (now out in paperback) in both places, and to show my appreciation (and show off a bit), I wanted to share it here, with the obvious ulterior motive of inspiring you to give TPE a 5 star review, too!

Lazarus’s most recent book is A Beautiful World available in paperback and  (accessible) Kindle ebook.

5.0 out of 5 stars Revealing and rewarding work of impressive scholarship

Reviewed in the United States on September 1, 2022

“Blindness is not just a subject; it is a perspective.”[i]

So writes M. Leona Godin in the introduction to the wonderful There Plant Eyes: A Personal and Cultural History of Blindness. As the title promises, the work delivers on tracking western stigmas and perceptions of blind/partially blind persons, mining nearly three thousand years of the cultural representations of “blindness” in all their complexity. From Homer, Sophocles, Ovid, Shakespeare, Milton, Joyce, Borges, Keller, and in works such as Oedipus Rex, the Gospels, King Lear, Paradise Lost, Dune, to modern novels, memoirs, scientific studies, and the author’s own personal experiences of blindness – all within 280 pages. Though the work takes a formidably wide breadth, it manages to stay grounded and focused in its analyses.

As the author candidly admits, this work is a personal and cultural history. Importantly, however, it doesn’t personalize history, but historicizes the personal. The work invites readers to consider representations of blindness and their sometimes subtle pervasiveness in western culture: whether sophisticated and sensitive in their use of blind characters, or given over to stereotypes of blindness (such as the “superblind” trope or the protagonist-affirming prophet), or simply playing blindness as a gag. As the author states, “There Plant Eyes seeks to chip away at the pervasive ocularcentrism of our culture, to open up a space for social justice that accepts sensorial difference” (xviii). This driving goal is one that the work delivers on quite well. It is a call to action, but it is not heavy-handed in its message or confrontational in its social justice purpose. It pulls you into its world with intelligence and grace, without condemnation or accusation.

The author brings readers into the world of what it means to live and be perceived as a blind person, deftly weaving the personal and the public, the individual and the historical/cultural. One of the best things about this work’s methodology is that the author does not see themselves – and, it is implicitly argued, nor should we see ourselves – as separate from the histories we find ourselves in or the cultures and communities that constitute an increasingly diversifying world. Nor should we ignore our human responsibilities toward one another, as the work’s emphasis on social justice testifies.

Like its range of knowledge, the work’s targeted audience is broad. With brisk and accessible prose radiating with responsible scholarship and nuance, There Plant Eyes appeals to a wide and varied audience: academics, non-academics, and general readers invested in disability studies and/or intersectional activism. Some of its claims may raise provocative questions for discussion, but that seems to be the point. In short, it will change the way you think about blindness and those who live with it.

I confess that, until I read this work, virtually my only experience with blind or partially sighted people was making way when I saw the tell-tale cane swaying back and forth before them on the sidewalk. Little did I know the complex history or the cultural perceptions of blindness in western literature, which There Plant Eyes masterfully reveals. As it did for me, this work will change blindness from a subject to perspective.

[i] Here’s the endnote on this from the intro, “Seeing and Not-Seeing”:

I first heard the idea that blindness is not only a subject but a perspective from Andrew Leland, who is a writer, editor, and podcast producer with RP, whom I met in November He had seen the documentary Vision Portraits by Rodney Evans (who also has RP), in which writer Ryan Knighton (who also has RP) explains how as a person and a writer without sight, he had come to find the idea of blindness as perspective (rather than subject) to be liberating. Since Vision Portraits was released in only a few cities, I did not see it until nearly a year later when the Whitney Museum screened it online (with audio description) in celebration of the thirtieth anniversary of the signing of the ADA (Americans with Disabilities Act). By that time, I was in the late stages of editing this book.

*Thanks Lazarus Belle! Consider following his lead by giving There Plant Eyes a 5 Star review on Amazon or Goodreads, or post your review in the comments below…