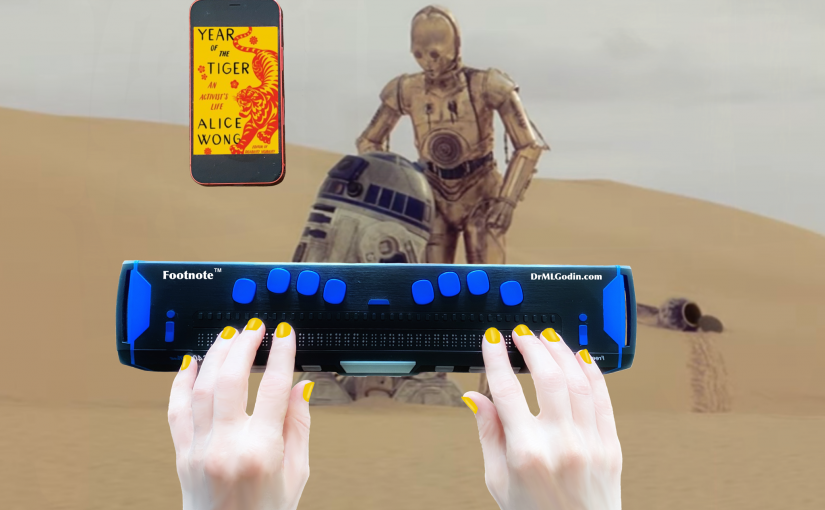 Year of the tiger: An Activist’s Life (Vintage, 2022) by Alice Wong (editor of Disability Visibility) is funny and angry and silly and deadly sobering and so much more. It’s a collection of essays, interviews, and images on subjects ranging from accessible and inviting coffee experiences to the Chinese Lunar New Year, from media representations of disabled people to the eugenic policies of our medical system. I love the random list of favorite lipstick colors and all the food talk. The “Shelter-in-Place Jook” recipe alone makes me want to write another Footnote on Year of the Tiger for Aromatica Poetica!

Out of all the fun and nerdy sci-fi culture Wong references in her first origin story, “A Mutant from Planet Cripton,” I latched onto this: “In elementary school I read Madeleine L’Engle’s A Wrinkle in Time, and it blew my mind.” I’d heard the title, of course, but somehow I had never read A Wrinkle in Time as a kid (or I forgot it), so I was inspired to read it as a grown-ass person. I can’t speak for Wong, but for me it was Aunt Beast and her fellow creatures without eyes or faces who blew my mind.[i]

My favorite moment in Year of the Tiger is charming and  packs an accessibility punch. In “My Day as a Robot,” Wong describes how in 2015 she was invited to the White House for the 25th anniversary of the Americans with Disabilities Act (ADA) celebration with President Obama. But she does not travel anymore, and was prepared to decline the offer: “It’s a major bummer to miss meetings, opportunities, and social events because of my disability (and larger systemic factors), but I’ve reached a place where I try to focus on ways I can participate remotely or behind the scenes.”

It turned out that she was able to visit virtually and even move around the gathering as a robot! Specifically a Beam Pro telepresence robot:  .

A telepresence robot looks like a computer screen attached to legs with a base and wheels. Using my laptop at home, I could see everything with its webcam, and everyone could see and hear me as well. I could independently move around physical spaces by navigating using the arrows on my keyboard. It was very simple to use.

A screenshot taken from my laptop as I operated a telepresence robot in the White House. The image shows three file windows: First, a view from the robot’s perspective of the Blue Room, where a marine in white dress uniform is introducing me to President Barack Obama, who is looking right at me. Second, a smaller file window below the first that shows the wheels of the robot so I don’t encounter any obstacles. And third, a file window on the right side of the screenshot that shows my laptop camera’s view, which is the image people see when they look at the robot. In the image, I am smiling with my mouth wide open in delight from my bedroom.

I highlighted this passage and made this digital note: “this is so cool! Loving the image description! I got chills. and then I got them again when she calls out assistive technology as I’m reading on my braille display…”

Many disabled people right now are using assistive technology that allows them to participate fully in society. I wrestle and think about the privileges I have when it comes to access to technology: I can afford a smartphone, a laptop, and broadband internet service. I don’t face accessibility barriers when using YouTube, Twitter, or Facebook. I am able to access and process online content with relative ease.

I felt as though Wong knew I was right there accessing her book thanks to digital technology. Growing up and into blindness in the 80’s and 90’s, I often had to wait months, years, or sometimes forever to get books I wanted put onto tape by volunteer readers through Recording for the Blind or the National Library Service. Now I can get books like Year of the Tiger as soon as they’re published. Yet there are still so many websites that do not bother with accessibility features or alt text. There are still literary magazines that will not publish ebooks. Just last week Twitter cut its entire accessibility team. There are still many barriers as Wong acknowledges: “I wish all disabled people had what they need in order to live the lives they want.”

Wait, no, perhaps “Future Notice,” a fabulous obit for Alice Wong who died in the Year of the Tiger 2070 “at the tender age of ninety-six,” is my fave bit. The “oracle, storyteller, cyborg, troublemaker, activist, night owl” did many incredible things, not least of which was that in 2026 she became “the editor in chief of the first disability-centered imprint for a major U.S. publisher. Along with many other disabled editors, writers, and colleagues, the imprint helped usher in what is considered the first of several golden ages of disability publishing.”

Hear, hear! I hope I was a part of that…

This is the fifth in my series of “Footnotes on Books”—my answer to the book review—because there’s just too much to say about books I love! Check out my previous Footnote on So Lucky HERE.

PPS – Alice Wong kindly gave me a wonderful blurb for There Plant Eyes which you can read HERE.

[i] The protagonist of A Wrinkle in Time finds herself on what appears to be a dull colorless planet inhabited by faceless and eyeless creatures, who she might begin to pity but, being nurtured back to health by one she comes to call Aunt Beast, she realizes limitations and powers are always relative:

If it was impossible to describe sight to Aunt Beast, it would be even more impossible to describe the singing of Aunt Beast to a human being. . . . It was a music more tangible than form or sight. It had essence and structure. It supported Meg more firmly than the arms of Aunt Beast. It seemed to travel with her, to sweep her aloft in the power of song, so that she was moving in glory among the stars, and for a moment she, too, felt that the words Darkness and Light had no meaning, and only this melody was real.

Meg did not know when she fell asleep within the body of the music. When she wakened Aunt Beast was asleep, too, the softness of her furry, faceless head drooping. Night had gone and a dull gray light filled the room. But she realized now that here on this planet there was no need for color, that the grays and browns merging into each other were not what the beasts knew, and that what she, herself, saw was only the smallest fraction of what the planet was really like. It was she who was limited by her senses, not the blind beasts, for they must have senses of which she could not even dream.