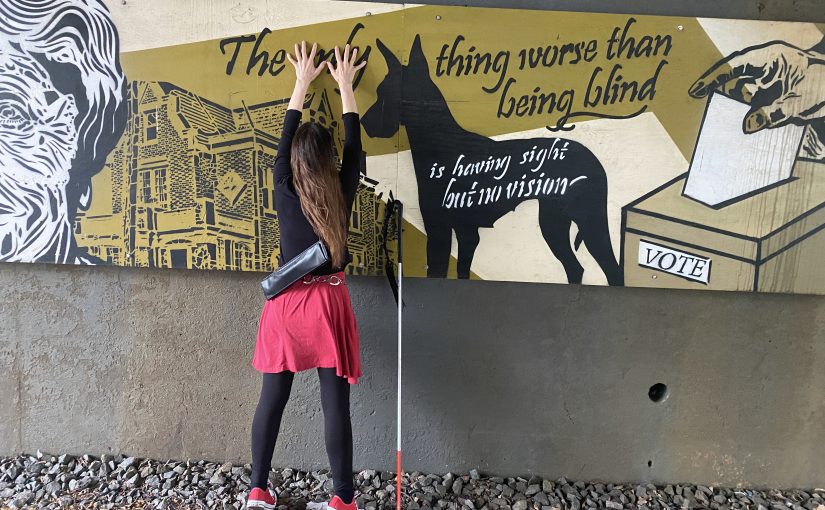 Thanks to a wonderful writer friend, Jess DeCourcy Hinds, I learned about The Helen Keller Forest Hills Tribute Mural in Queens, New York, where Keller lived for many years. Sadly, Keller’s home no longer exists. In its place stands the Reform Temple of Forest Hills at 71-11 112th Street, which was formerly 93 Seminole Avenue. That’s “where Helen Keller resided in a brick-gabled and limestone seven-room house that she nicknamed ‘our castle on the marsh,’” according to the Queens Gazette.

The mural, which extends an impressive-sounding 48 feet is painted on plywood panels. One of the panels includes the famous and, as  far as I can tell, unattributable quote: “The only thing worse than being blind is having sight but no vision.”

I’ve checked several likely books of hers and tried various Google queries with no success. My search was by no means exhaustive, but I couldn’t find any source (or even date) for this quote. Not that Keller would never have said such a thing. Brilliant as she was, she has her fair share of shmaltzy quotes that hinge on the blurring of physical and mental blindness. That said, “the only thing worse than being blind” is a bit hyperbolic.

Until someone shows me the source, I’m gonna assume someone made it up wholesale or kind of made it up piecemeal. If she did say some such ableist thing in order to make a point about ignorant people who lack metaphorical vision, elsewhere she celebrates the senses she does enjoy:

What I have written about smell, especially person-smell, will perhaps be regarded as the abnormal sentiment of one who can have no idea of the “world of reality and beauty which the eye perceives.” There are people who are color-blind, people who are tone-deaf. Most people are smell-blind-and-deaf. We should not condemn a musical composition on the testimony of an ear which cannot distinguish one chord from another, or judge a picture by the verdict of a color-blind critic. The sensations of smell which cheer, inform, and broaden my life are not less pleasant merely because some critic who treads the wide, bright pathway of the eye has not cultivated his olfactive sense. Without the shy, fugitive, often unobserved, sensations and the certainties which taste, smell, and touch give me, I should be obliged to take my conception of the universe wholly from others. I should lack the alchemy by which I now infuse into my world light, color, and the Protean spark.”

These words from her 1908 book The World I Live In, do not dwell on what blindness lacks but stridently affirm what the other senses offer. Smell, taste, and touch are often forgotten in our constant harping on the sight-blindness binary, as I often mention in There Plant Eyes.

After all, there are many things worse than blindness—death is kind of a gimme. The list would likely be different for everyone, but off the top of my head I’d say war, slavery, rape, torture. Also: living life without purpose or meaning, feeling unloved, lonely, and useless are worse. There are others.

Regardless of the quote, I was super underwhelmed by this mural that is not, in my mind,  really a mural as it is not painted directly on the concrete wall of the LIRR overpass, but on relatively flimsy wood planks. It includes the word “braille” with a lightning bolt, which means? Not sure.

Nonetheless, glad to know it’s there and, of course, I couldn’t resist the photo op!