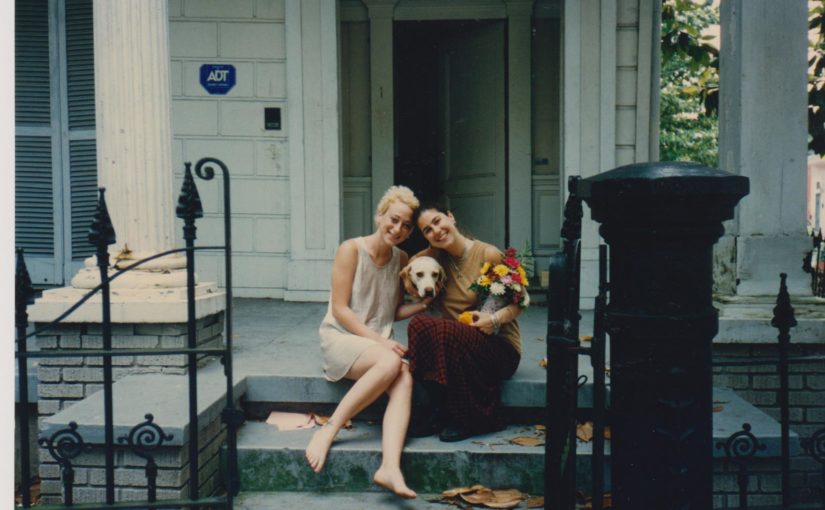 I’m a little late to the party, but then again I was sort of early too. I just started watching the HBO show treme, and I love it so much, I don’t allow myself to binge watch. I save it for a good ole romp on the treadmill—one episode a day, if I make it to the treadmill. The opening credits get me going every time.

But it was episode 5 of season 1 “Shame, Shame, Shame” that provoked me to write. Thanks to the great sound design, the second line scene—before the shooting—was viscerally what I remember my life in New Orleans being. It was so full of brass that you felt your head would blow off in the wind–the closest thing to a punk show I’ve experienced since my few punk shows back when I was a kid. But the shooting felt real too. Treme does a great job of depicting so much that is beautiful and scary and totally out of control and special about New Orleans.

My best friend Indigo and I moved to New Orleans in 1996, just two years after New Orleans infamously broke the record on murder. “Nov. 29, 1994, is the day the murder record was broken in New Orleans. There were 28 more murders before the year ended,” according to NOLA.com. I was vaguely aware of the dangers of the city that I bragged to my California friends was the closest thing I could get to a third world country and still be in the united states—and that was before Katrina and her aftermath that is depicted in Treme.

It would have been impossible to not notice that instead of goodnight or have a good one people said, “Be careful.” At the Circle K down the street from us, at the bars when you were leaving, at the corner store, everyone said, “Be careful.” Perhaps it was because we were two pretty naive white girls living in a predominantly black neighborhood on the other side of Ramparts from the French Quarter, but I think it was also a sign of the times.

I suppose I should mention that I can’t see a damn thing of the show, and my memories of New Orleans and the Tremé are of a time when I could see pretty well. I was visually impaired, so there wasn’t always a lot of detail, and I couldn’t read normal print, and I couldn’t recognize faces. But I could still see.

I could see our swimming pool with its hodgepodge of floaty toys and the banana trees that would grow before your very eyes. When Indigo and I first moved there, we just sat in that picture window smoking and saw those trees shoot up and sprout leaves and fruit. And I could see the crazy inhabitants of our little Shangri-La parade by: the strippers and the hookers and the punks and the gay gentrifiers and the boys next door (who were, like us, from California) and the French business guy.

And I could see the wacky architecture, eight apartments carved crazily out of two antebellum mansions and their carriage houses: ours was the downstairs ballroom-fronted apartment with two shoebox bedrooms stacked on top of each other in the back with odd vanity lightbulbs running from my room to Indigo’s above which she accessed with one of those iron spiral staircases that are made to go into tiny spaces, so common in Paris. And next door the boys lived in a five-story apartment that was just one room stacked on top of the other, starting with the kitchen and topped by a roof.

Our grand mansion was on the front side of the Tremé, if you think of the front as Esplanade, but on the backside if you think of the Tremé as the heart, which we did. Directly behind our pool was Little People’s, which was run by the family of Kermit Ruffins and it would burst with music every Wednesday night. You had to be careful upon entering, had to wait for the music to stop because the place was so small that the drums had to be set up right in front of the door.
And you’d go in and the place was packed and the horns were in your face and the beers were two dollars and the chicken necks were on the house and I just remember being there with a huge smile every time, thinking this is the real new Orleans, which seems to me to be the sometimes tongue in cheek sometimes painfully true motto of Treme.
If you’ve seen the show you know Kermit Ruffins is a fantastically fun entertainer and excellent trumpeter, but he was basically a staple in our lives when we were there. I can’t claim to have been a close personal friend, but we saw him play all the time, and he and other such legendary locals came to our ballroom apartment once or twice.

I couldn’t help but fall in love with the show Treme from the very first episode when Davis, who reminds me of 95% of my performer/musician friends—yes, I’m talking to you!–sees Elvis Costello, who appears as himself in the show, and tries to get Kermit to go up and introduce himself because it would be so great for his career, and all that, and he’s so hopping frustrated that he finally says something like, “Kermit, you’re telling me all you wanna do is get high, play some trumpet and barbecue in New Orleans for the rest of your life?” And of course Kermit’s like, “yep, that sounds pretty good.” And everyone laughs at Davis’s expense.

Well, some part of me agrees with Kermit and wishes I would have stayed in New Orleans at 1260 Esplanade, on the backside of the Tremé, and continued my simple Big Easy life. I worked at Degas House, the ancestral home of the painter Degas’s creole relatives turned bed and breakfast. I was its breakfast chef and every morning I rode my blue and yellow banana-seat bike up Esplanade and back. I made egg puffs and quiches and muffins for tourists. It was an adorable job, made odd by my visual impairment. And I almost didn’t go to New York, to grad school, because of that job and our cute little band, an all-girl punk band called “Down There,” with me on drums and Indigo as our front woman.

Recently I’ve been reading guidebooks and doing research for a story I’m working on, which is what led me to the show. It’s all brought my nostalgia for the Tremé and New Orleans to the foreground, but of course there’s the fact that I was in my twenties and still had vision, so my nostalgia is a little mixed up with those things too, which makes going back even more impossible for me than most. That’s ok, I listen to Treme.